In the early days of the gold rush, food on the goldfields was expensive and limited in variety. Herds of sheep were driven to the diggings, providing a relatively affordable supply of mutton, but most other foodstuffs were imported from overseas or from other Australian colonies. South Australian farmers prospered as demand for wheat flour increased.

Stores and grog shops sprang up to supply the miners, and helped to supplement their diets with imported canned goods and pickles. Fresh vegetables were particularly expensive and hard to come by.

The prohibition on planting gardens on the goldfields was an attempt to prevent miners from establishing permanent residences there. In 1853, a recommendation was made to the Victorian government that miners should be allowed to plant gardens, particularly to grow vegetables, and as miners were gradually granted right of residency over Crown lands, more gardens were established.

In her memoir A Lady’s Visit to the Gold Diggings of Australia in 1852-53, Ellen Clacy wrote:

…meat is generally from 4d. to 6d. a pound, flour about 1s. 6d a pound, (this is the most expensive article in house-keeping there,) butter must be dispensed with, as that is seldom less than 4s. a pound, and only successful diggers can indulge in such articles as cheese, pickles, ham, sardines, pickled salmon, or spirits, as all these things, though easily procured if you have gold to throw away, are expensive, the last-named article (diluted with water or something less innoxious) is only to be obtained for 30s. a bottle. The stores, which are distinguished by a flag, are numerous and well stocked.

Spirit selling is strictly prohibited; and although Government will license a respectable public-house on the road, it is resolutely refused on the diggings. The result has been the opposite of that which it was intended to produce.

She goes on to describe the riotous behaviour and violence associated with sly grog shops and explains how, by paying an extra shilling for some commodity such as tobacco, a customer might be ‘given’ a glass of spirits by the genial store proprietor. 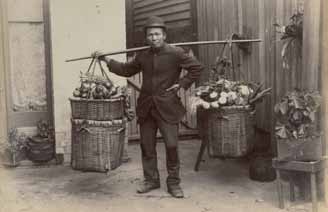 Chinese immigrants played an important role in supplying vegetables to the goldfields. Arriving initially to seek gold, many turned to market gardening, a contribution that was highlighted in a booklet protesting against increasingly restrictive immigration laws:

‘It cannot be denied that our countrymen have been good colonists. Had it not been for them, the cultivation of vegetables, so indispensable to the maintenance of health in a hot climate like this, would scarce have been attempted in the neighbourhood of some goldfields; and the mortality of children would have been very much greater than it really has been. Lease or sell half an acre of apparently worthless land to a small party of Chinamen, and, if there is access to any kind of water or manure, they will transform it, by their system of intensive husbandry, into a most prolific garden.’

According to the blog page from the Sovereign Hill tourist attraction, the local Wadawarrung people sold eels, which could be smoked or turned into eel soup, to the miners around Ballarat. The Sovereign Hill website has a recipe for eel soup here.