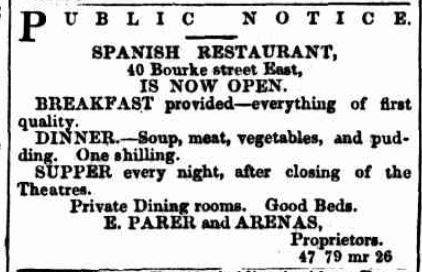 In 1856 an establishment called the Spanish Restaurant was operating in Elizabeth Street, Melbourne. It seems that it was a joint venture between a French man and Catalonian immigrants Josep and Francesco Parer. Another Parer brother Estafan soon joined them and became a partner in the business. In 1861 the Spanish Restaurant moved to 40 Bourke Street and continued at this address for 23 years. Two other brothers, Felipe and Juan, arrived and the family built a hotel and café empire that endured for many decades.

There is no record of the menu at the Spanish Restaurant, which may have taken its name from the nationality of its proprietors rather than the nature of the food. However, given that the gold rushes had attracted immigrants from Spain it may be that the Parers’ restaurant provided them with some of the dishes from home.

Parer Bros. became famous nationwide and opened branches of the Spanish Restaurant as far away as Menzies, on the Western Australian goldfields.  In the 1890s, S. Guardiola, a manager from Parers’ in Melbourne, opened a Spanish Restaurant in Hay Street, Perth. Like its namesake in Melbourne, his establishment offered accommodation as well as food, and advertised beds for one shilling with hot and cold baths.  The restaurant served three courses for a shilling and there was a private room for ladies.

In Melbourne, the Parers became a significant force in the restaurant and hotel industry. Their most famous establishment was Parer’s Crystal Café and Hotel at 200 Bourke Street, built in 1886.  The hotel could accommodate more than 650 people and had luxuriously furnished dining rooms and café.

While the Parers, and in particular, Estafan, remained leading figures in Melbourne’s Spanish community, it seems that that their ventures soon dropped the Spanish identity and adopted more traditional colonial menus.  In 1895, the hotel was advertising an “English Menu” which consisted of:

Francis Parer left the restaurant business and began a market garden at Box Hill, where he was one of the first in the colony to grow tomatoes commercially.