Jam was among the first locally manufactured foods in Australia. George Peacock of Hobart was the first to produce jam in tin cans, rather than jars. Peacock began to produce jams in a backyard factory. In response to demand from his customers he set up in a warehouse at Hobart’s Old Wharf where he  canned jam using  fruit shipped from the Huon in fishing boats.

George Peacock was born in Bath, England, and arrived in Hobart in 1850, setting up  a grocery and fruit shop . He was possibly the first to make jam commercially from Tasmanian berry fruits. The fruit was boiled with sugar in steam-jacketed copper kettles. Peacock’s cannery manufactured its own cans from imported Welsh tinplate and each can was hand soldered and hand-washed before filling. Peacock and three other manufacturers were exporting jam to the other Australian colonies by 1863. 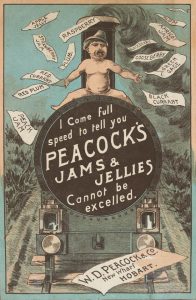 While Peacock is generally recognised as the first to can jam, other manufacturers were not far behind. Johnson Bros. & Co., also of Hobart were canning jam by 1870. By the end of the 1870s there were canning operations in Victoria, New South Wales and South Australia. Victoria introduced a protective tariff on jam of 2d a pound in 1871, helping to encourage local manufacturers. Other states also imposed tariffs.

To avoid tariffs, the George Peacock & Sons operation was expanded to Sydney and, eventually, Melbourne. The Sydney operation began in 1880. Peacock had a number of battles with New South Wales authorities over the duties charged on the Tasmanian fruit pulp he imported for his factory. There was also controversy over the quality of the product, which culminated in George’s son William accusing the Colonial Secretary of corruption.

The rather bizarre advertising poster reproduced here may have been linked to the opening of the main rail line between Hobart and Launceston in 1876. At this time, tin from the Mount Cameron mine was being shipped via Launceston to Peacock’s to be used in the manufacture of jam tins.

In 1887 George Peacock & Sons was taken over by a company formed by Henry Jones, George’s son Earnest and  Achalen Palfreyman. The company became Henry Jones & Company and, eventually, IXL.