The Granny Smith apple is named after Maria Smith, an orchardist in Ryde, Sydney. Maria discovered the apple growing on her property as a ‘sport’ from some French crab apples. As a true mutation, the original seedling gave rise to more, which were originally exhibited as “Smith’s seedlings”, then “Granny Smith’s seedlings”, and finally just “Granny Smith’s”. The apples remained a local curiosity until after Maria Smith’s death.

The first apples came from Kazakhstan, where the wild variety – Malus sieversii – still grows. Apples are subject to what scientists call extreme heterozygosity. What this means is that each seed is likely to have a different genetic make-up, with the potential to produce a tree with fruit that varies from that of its parent. Because of this, apples are propagated by grafting, ensuring that the new tree is identical to the old one. 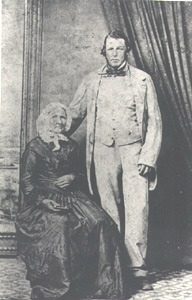 Granny Smith apples arose because of this genetic diversity. The story goes that, on one of her visits to the city markets, orchardist Maria Smith had bought a case of French crab apples from Tasmania. She discarded some that had gone rotten near the creek that ran through her property and some of the seeds germinated. When one of the seedlings began to bear fruit, Maria recognised it as a new variety of apple – an opinion that was confirmed by another local orchardist, Edwin Small.

Maria died in 1870 but the apple continued to be cultivated in the area, where it was valued as a cooking apple. A local orchardist Edward Gallard bought part of the Smith Farm and developed the Granny Smith seedling.

There appears to be some confusion about ‘Smith’s seedlings’ and ‘Granny Smith’s seedlings’. In 1877, “Smith’s seedling” was among the varieties exhibited by Mr Stieme of Fairfield at the second annual meeting of the Eastern Suburbs Horticultural Society and they were being grown as far away as Forbes by 1881 and Orange in 1884. However, these are referred to elsewhere as ‘Jim Smith’s Seedlings’, further divided into ‘Smith’s Early’ and ‘Smith’s Late’, and may well be a different variety altogether.

‘Granny Smith seedlings’ were exhibited by at the Castle Hill Agricultural and Horticultural Show in 1889. The Cumberland Argus and Fruitgrowers Advocate reported that:

The best exhibits under this heading were the dessert apples shown by Messrs. W. H. Allen and D. G. High, of Castle Hill. Both showed Granny Smith seedlings (New York Pippins). Mr. Allen’s display was one worthy of the district and did him very great credit. He says he has a lot of the trees in bearing, ‘because,’ as he cutely remarked, ‘they pay.’ The fruit was of grand size, remarkably clean and healthy looking. The trees from which his exhibits were obtained are seven years old.

In 1895 Albert H. Benson, Fruit Expert for the NSW Department of Agriculture, named ‘Granny Smith’s Seedling’ as a suitable variety for export. He also initiated the first large scale cultivation of the apple at the Government Experimental Station in Bathurst.

Granny Smith apples are a firm, tart apple with high acidity and the ability to hold their shape when cooked. They are slow to brown when cut and have excellent storage qualities and a tough waxy skin, which makes them easy to ship. They were introduced commercially in the United Kingdom in the 1930s, and to the United States in the 1970s. They’re now grown in Australia, New Zealand, Europe and the United States.