According to the Phillip Island & District Historical Society, chicory was first grown on Phillip Island in 1870. It was used as a substitute for coffee or as an addition to coffee essence.  Until 1873, when the first chicory kiln was built on the island, the chicory was shipped green and taken to Melbourne by Captain John Lock in his ketch, John and Elizabeth.

Chicory as a coffee substitute 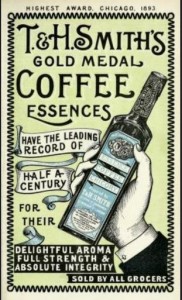 The leaves of many varieties of chicory, including radicchio and witloof, are used for salad. The large-rooted variety was first developed as a substitute for coffee in Holland in the 18th century. Coffee was expensive and various alternatives were tried, including grain, acorns and ground dandelion roots. The French developed a taste for chicory during the Napoleonic wars and continued to mix it with their coffee. Coffee with chicory is still common in some parts of southern USA, thanks to their French Creole heritage.

Coffee essence was a Scottish invention. T & H Smith and Co. of Edinburgh devised the first liquid essence of coffee in 1840. Other brands soon followed. Camp Coffee, another Scottish coffee and chicory essence, began production in 1876 and is still available. In the UK and Australia, coffee essence was widely advertised as the earliest form of instant coffee. Chicory was commonly added to coffee essence – whether to reduce the cost or simply to add its own distinctive flavour is not clear.

Chicory was being grown in Victoria by the 1860s and in 1873 the first chicory kiln on Phillip Island was built by Messrs. John and Soloman West, in Cowes.  The industry expanded and by 1920 there were at least 25 kilns on the island. Initially chicory was a very labour-intensive crop, with the roots being dug by hand. Mechanised harvesting was introduced in the 1930s. In 1936 a Chicory Marketing Board was formed, and the industry reached its peak in the 1940s.

The chicory was sold to manufacturers who roasted it, broke it into small pieces and blended it with coffee beans or into essences. Locally-made Brookes Coffee Essence was being advertised by 1916, Bickfords in South Australia began producing their coffee and chicory essence in 1920 and by 1930 Fauldings were trumpeting that their coffee essence had been used by Douglas Mawson during his polar explorations.

One of the most popular Australian brands through the 1930s and ‘40s was the Turban brand, made by the Kornie Food Co. Pty Ltd in Melbourne. Advertisements in 1945 described it as having ‘real moccha flavour’ and ‘that delightful Oriental flavour’.  Coffee essences  were also produced by tea and coffee merchants Robur and Bushell. The Bushell’s product is still available in Australia, as is the Bickford’s essence which is now marketed as Bickford’s Iced Coffee Syrup.

Coffee essence remained in common use until the 1950s, but the introduction of instant coffee power in 1947 provided an equally convenient and, to most people, better tasting alternative. The chicory industry declined on Phillip Island, with the last crop being harvested in 1987.