Although soda fountain machines had appeared in Australia at least as early as the 1860s, the first American-style drugstore soda fountain seems to have been in the pharmacy of Caleb and Washington Soul (who later gave their name to Soul Pattinson). Their store in Pitt Street, Sydney, included a large soda fountain and milk bar and became part of Sydney’s social scene.

Techniques for artificially carbonating water were first developed in Europe in the 18th century, when chemists competed to replicate the mineral water found in natural springs. Englishman Joseph Priestly produced drinkable carbonated water in 1767 but the term ‘soda water’ was not coined until 1798.  The first soda fountains emerged in the USA in the early years of the 19th century, with mass manufacture beginning in the 1830s.

Soda fountains, often elaborate marble constructions, were in use in Australia at least as early as the 186os. In the Melbourne Argus on 9 March 1867, John Cleeland, proprietor of the renowned Albion Hotel in Bourke Street, begged to inform the public that ” he has purchased the ICE CREAM SODA FOUNTAIN from Mr George Coppin (imported by that gentleman from America)”.

In Australia, it seems that soda fountains were more associated with refreshment rooms and hospitality establishments than pharmacies. The Souls may have been the first to introduce the drugstore format, but were far from the first to sell carbonated drinks.  Their Pitt Street establishment, however, certainly preceded that of Earnest Hillier, who claimed to have opened “Australia’s first American-style soda fountain” at Sydney’s Imperial Skating Rink in Fairfield in 1911. 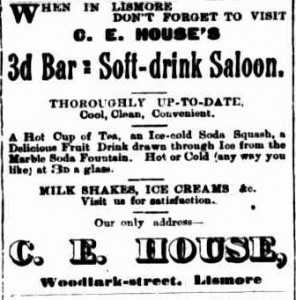 Hillier quickly had competition from the Anglo-American Company, formed in 1912  by Greek migrants from the United States. There are also claims that another Greek settler, Angelos Tarifos (later known as Burgess) installed a soda fountain in his Niagara Cafe in Newcastle before 1910.  C.E. House’s soda fountain was certainly operating in Lismore by 1904.

Soda fountains were well patronised through the 1940s and ’50s, but once bottled soft drinks were available through self-service groceries and supermarkets their popularity waned.