The Doyle family trace their restaurant’s history back to 1885 when Henry Newton and his wife Hannah opened tea rooms on a beach-side site at Watsons Bay, Sydney. In 1948, their grand-daughter Alice Doyle revived the business, which became known as Doyles Restaurant, famous for its seafood. The family opened further restaurants at Rose Bay, Circular Quay and the Sydney Fish Markets.

Henry Newton was a fisherman living at Watson’s Bay on Sydney Harbour. The tea rooms he opened with his wife evidently blew down in 1907 and the following year their daughter, Eva, opened the two-storey Ozone Cafe on the same site. During the Great Depression, the business folded, but after WWII Alice Doyle and her husband Jack re-opened the dining room. According to the Woollahra History and Heritage Society they initially served just fish, with scones and jam for dessert. 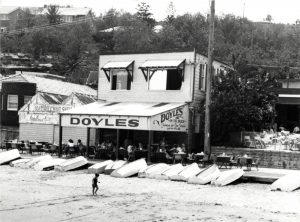 The Sydney Morning Herald quotes a family story explaining why the restaurant came to serve only fish. One of the Doyle grandsons, Peter, explained that Alice used to cook and Jack used to wait tables. But people used to complain that the steaks were tough. According to Peter “Grandfather said, ‘Right, from now on we’re only going to serve fish. No-one ever complains about the fish!’ And Grandmother said, ‘Well, if we’re only doing fish, you can do the cooking.’ And that’s how their roles were reversed.”

There were further ups and downs, including a time when the couple sold the business and operated another restaurant at Rose Bay. However, they returned to the Watsons Bay site in 1967 and Doyles Restaurant soon became known for its fresh seafood. In 1968 the family opened Doyles at the Wharf, renaming the original restaurant Doyles On The Beach.  They also bought the lease of the Watson’s Bay Hotel, with its beer garden looking back across Sydney Harbour.

In 2002, there were 22 members of the family working in the business. By this time, restaurants were operating at Circular Quay and the Sydney Fish Markets. Sadly, when Alice’s son Peter died in 2004, things fell apart. It was agreed to divide the business between Peter Doyle Jnr and his uncle, Michael. However, it seems the the terms of the agreement provoked bitter wrangling and a law suit ensued.

In 2014, Doyles at the Quay was closed as part of the redevelopment of Sydney’s Ocean Terminal. The Watsons Bay and Fish Market restaurants continue to trade. Prices vary enormously between them. As of 2020,  you wouldn’t find a main course at the Watsons Bay establishment for less than $40. “Doyles Famous Fish & Chips” would set you back between $47.50 and $49.50, depending on whether you preferred whiting, barramundi, snapper, flathead or John Dory.  The Famous Fish & Chips at the Fish Markets, however, was just $19.80 for “catch of the day”.

Of course, you’re paying for the view at Watson’s Bay. And if you’re in a retro frame of mind, it might be just what you’re looking for. While the Fish Markets restaurant has many offerings more geared to Asian tastes, Doyles on the Beach will do you Oysters Kilpatrick, Oysters Mornay, Garlic Prawns or Lobster Mornay.  Their seafood paella serves the rice on the side. It must be the only place where you can eat this quintessentially Spanish rice dish without the rice.