The first patent for a dish-washing machine was issued in 1850 in the USA, but the machine was never put on the market.  The version invented by American Josephine Cochran was the first practical model to use water pressure to clean dishes. It was exhibited at the World’s Columbian Exposition of 1893 in Chicago and soon installed in hotels and restaurants. By 1900 a power-driven dishwasher was being touted in Australia, and General Electric was selling the Hotpoint brand by the 1940s.  However, it was only from the 1970s that the dishwasher became common in Australian kitchens. 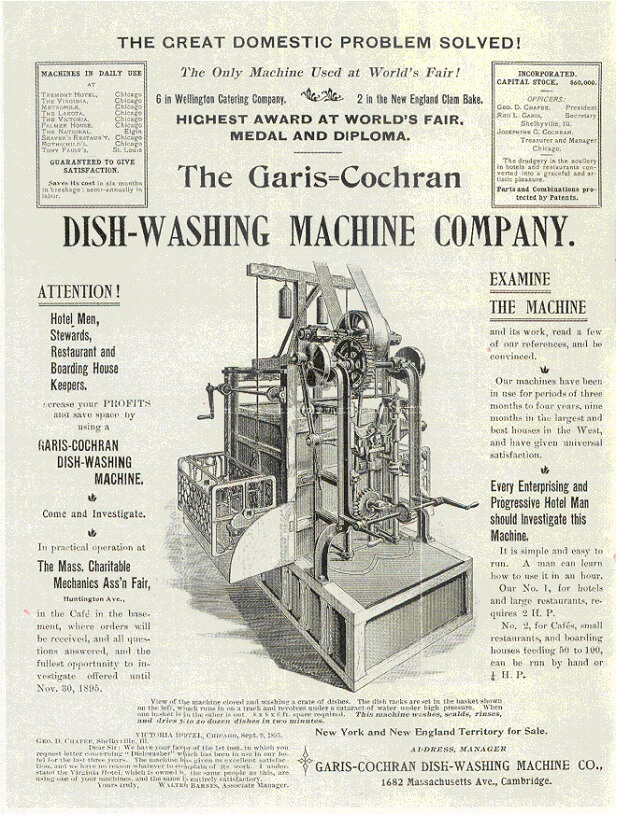 By all reports, Josephine Cochran’s dishwasher was invented, not to keep her own hands out of the dish water, but to prevent her servants from chipping or breaking her heirloom china. As a woman, she struggled to bring her invention to the notice of the wider world but it was eventually embraced by restaurants, hotels and other institutions. The company she founded became the Crescent Dishwashing Company.  In 1926 it was acquired by the Hobart Manufacturing Company, which produced dishwashers under the KitchenAid brand. In 1986, KitchenAid was acquired by the Whirlpool Corporation.

A “mechanical contrivance for housewives” was described in the Freeman’s Journal in Sydney in 1892. In the early 20th century, it seems many inventors developed their own dishwashing machines, progressing from the manual dishwasher that required the operator to pour water over the dishes and pump a lever to circulate it, to an early electric dishwasher invented in Sydney in 1924 by Dalton’s Ltd. Malley’s Ltd. applied for patent rights for their machine, invented in Grafton, in 1939.

By the early 1940s, General Electric were advertising their Hotpoint dishwasher in Australia as part of the all-electric dream kitchen. These early models were not built into the kitchen bench but were on castors and had to be wheeled up and attached to the taps and drain. The  idea of a built-in dishwasher remained sufficiently novel to be worthy of comment in real-estate advertising right up to the 1980s.