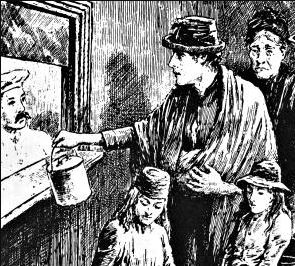 The 1890s depression in Australia occurred after the land boom bubble of the 1880s burst. Overseas investment dried up, banks failed and unemployment soared. Relief societies were formed in many parts of the country to distribute aid to poverty-stricken families – generally of meat, bread and tea. Families in the poorer suburbs of major cities were desperate and many men took to the road to seek work.

There were many factors that led to the 1890s depression, including a fall in the price of wool which, at the time, made up around half of Australia’s exports. During the boom years of the 1880s, overseas capital had poured into Australia, with much of the investment going into pastoral industries. Of all Australian cities, Melbourne was perhaps most affected. The prosperity that began with the gold rush had led to land speculation on a grand scale, with many property owners heavily mortgaged.

There were many building societies and property finance companies, known as “land banks”, and when property prices began to collapse in 1889 these institutions were left heavily exposed. Some of them failed and the loss of public confidence led to a run on the banks Australia wide.

In  1893 the Commercial Bank of Australia, one of Australia’s largest, suspended operations and many others soon did the same. By the middle of that year, 54 or the 64 financial institutions operating in Australia in 1891 had closed – 34 of them permanently. During 1892 and 1893, GDP fell by 17 per cent. By 1893, around a third of Melbourne’s breadwinners were unemployed. One in ten Melbourne houses was repossessed by the banks.

The conditions endured by the families of the unemployed were dire. “You look round the rooms, the kitchen with its empty shelves, the fireless grate,the solitary crust on a plate placed high up on the dresser to be out of the reach of the children till the time comes for its use, and you wonder with curious and unpleasant wonder how long you yourself could endure such a condition of affairs,” The Age reported in 1893. 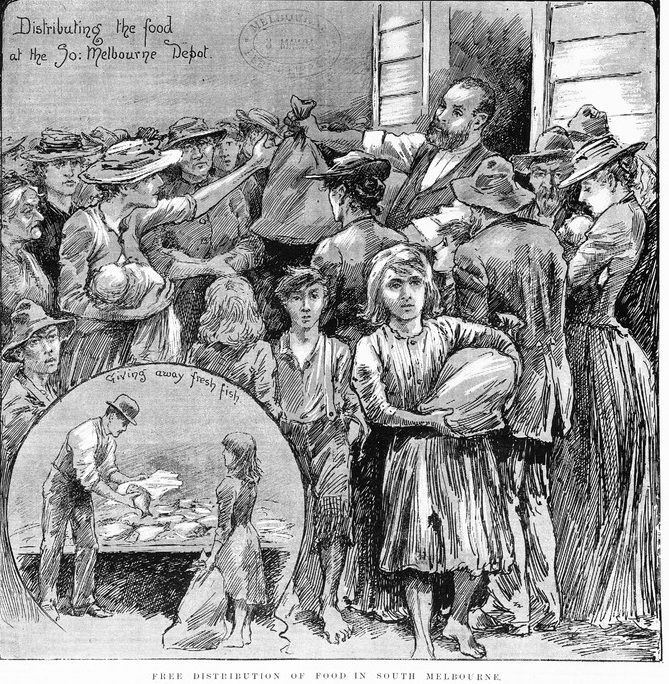 In South Melbourne, as elsewhere around Australia, a relief society was formed to distribute food and clothing to the poor. Tea, sugar, bread, meat and fuel were distributed to those who had obtained a ‘ticket’ denoting their needy status. Traders at the South Melbourne market were acknowledged for distributing meat at the end of trading on Saturdays.  In Adelaide, too, traders from the Central Markets contributed goods for distribution at the Old Exhibition Grounds.

Many of the men remained too proud to accept charity, but newspaper reports of the day tell of women and children, weak and dressed in rags, queuing up to accept food hand-outs. Some men left the cities of the east for the new goldfields of Western Australia. The depression of the 1890s was exacerbated by a severe drought that gripped much of Australia from 1895 to 1903, with prosperous times slowly returning in the years after Federation.