Arthur Yates established his Australian seed business in 1887 as a branch office of the Yates business in Auckland, New Zealand. In 1893 he launched his range of packet seeds for suburban home gardeners. Two years later he released the first issue of  Yates’ Gardening Guide for Australia and New Zealand: Hints for Amateurs, which was among the first guides written for home gardeners. In 1906, the Australian and New Zealand companies were separated and were  run independently on either side of the Tasman until the 1980s.

Arthur Yates’ grandfather was a grocer and seed merchant in Lancashire, England. His son, Samuel followed in his footsteps as did Samuel’s sons, including Arthur. At the age of 18 Arthur, an asthmatic, migrated to New Zealand, in search of a more agreeable climate. After working on the land for a couple of years, he opened a small seed shop in Auckland, travelling on horseback to sell seeds to farmers.

In 1886 Arthur visited Sydney, where he saw an opportunity to establish a similar enterprise. His younger brother Ernest had joined him in New Zealand in 1887 and Arthur decided to move to Sydney, leaving Ernest to manage the New Zealand business. In 1906 the brothers came to an agreement to separate the two companies and run them independently. This continued until the late 1980s when the two companies were reunited. 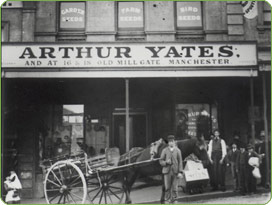 The first Yates Gardening Guide was a 90-page publication with  black and white illustrations. It became an annual publication with information on new seeds and varieties as well as the garden planning and management. It is still in publication.

Arthur’s sons Harold, Arthur, Guy and Philip all joined the firm continuing to manage the company after Arthur died in 1926.  Over the years Yates expanded its range of garden products to include fertilisers, sprays, pots, potting mix and tools. From the 1980s, Yates went through several changes of ownership. It is now wholly owned by Dulux Group.