Kentucky Fried Chicken in 1908? In Australia?  Yes, we discovered this in the household hints section of the Bundaberg Mail and Burnett Advertiser from 14 November 1908. Colonel Sanders clearly had nothing to do with it – he didn’t start his business in the USA until the 1950s. 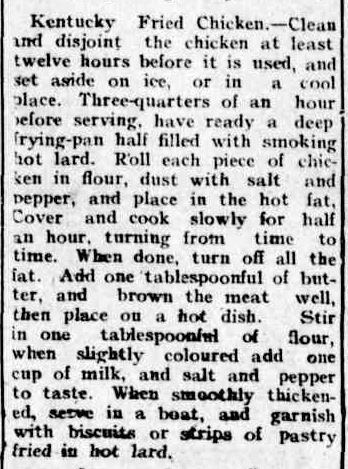 The recipe, far from having eleven herbs and spices, uses simply pepper, salt and flour to produce the crispy coating. The chicken is fried in lard. It’s accompanied by a gravy boat of white sauce made in the frying pan.

The recipe calls for ‘turning off’ all the fat. I assume this means draining off the fat, after which the chicken pieces are browned in butter. And what better garnish for fried chicken than fried pastry?

At this time many households, even in the city and suburbs, kept chickens in the back yard. The chickens chosen for this Kentucky Fried Chicken recipe may well have been the young roosters, or old hens that had come to the end of their egg-laying lives.

We can only speculate on how a Kentucky Fried Chicken recipe appeared in Bundaberg. However, this recipe is similar to a recipe for fried chicken that appeared in The Blue Grass Cook Book, a 1904 publication reprinted in facsimile by the University of Kentucky Press in 2005. Noted on Lynn Olver’s Food Timeline (which, sadly, may have disappeared from the web), that recipe goes like this:

Fried Chicken
Prepare young chicken and sprinkle with salt and lay on ice 12 hours before cooking. Cut the chicken in pieces and dredge with flour and drop in hot boiling lard and butter–equal parts–salt and pepper, and cover tightly and cook rather slowly–if it cooks too quickly it will burn. Cook both sides to a rich brown. Remove chicken and make a gravy by adding milk, flour, butter, salt, and pepper. Cook till thick, and serve in separate bowl.”
—The Blue Grass Cook Book, compiled by Minnie C. Fox, facsimile reprint 1904 edition [University Of Kentucky Press:Lexington KY] 2005 (p. 88)