The founder of Three Threes Condiments may not be as famous as one of his workmates, Bert Appleroth who founded Aeroplane Jelly. But Stanley McAlpine, a tram conductor like Bert, left an equally lasting legacy.  And unlike Aeroplane Jelly, the company he started, making a range of pickles and sauces, is still all-Australian and family-owned.

I recently (May 2020) had an email from Angela McAlpine protesting that I had missed the story of their family company. She pointed out that Three Threes had a 100-year history and was now being managed by the fourth generation of the family, with a fifth generation also working in the business. I confessed I wasn’t aware of the brand, but closer investigation revealed that I had a jar of their mint jelly in my fridge. So here’s the story. 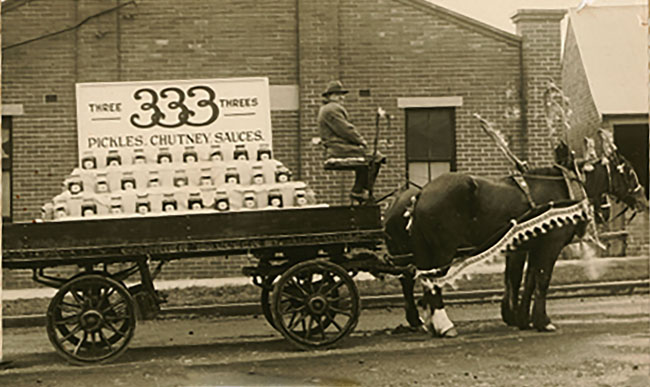 Stanley McAlpine and his wife Winfred began making and selling pickles, jams, sauces and chutneys from their Sydney home in 1919. The 333 (Three Threes) trademark was registered in 1920, originally attached to their brand of table vinegar, and manufacturing operations were soon moved to larger facilities in Woollahra. In the early days, products were sold to shop owners from a horse and cart.

Even in the 1920s it was a competitive market. It was not uncommon for housewives to make their own pickles and chutneys. There were many local brands, including Rosella, the Pick-me-up Condiment Co. and Wollongong’s “Kembla” brand. There were also imported products:  from Britain came Holbrooks and from the USA came Heinz.  In 1924, H. J. Heinz applied to trademark its name in Australia across a wide range of products including pickles, pickled onions, vinegar, chutney, sauces, relishes, mustard, fruit butters and many more. In 1928, Grace Brothers department store was advertising “A large and varied assortment of local and imported pickles and chutneys”.

Then, in 1930, competition from overseas abruptly ceased. Facing the financial turmoil of the Great Depression, the Scullin Labor government announced a raft of import restrictions in an endeavour to address Australia’s trade balance and encourage local manufacturers.  Among the goods that became prohibited imports were onions, pickles, sauces and chutney. While local competition continued, the embargo on imports must have been helpful. Over the following years the Three Threes business grew and by 1935 McAlpine was exporting condiments to the Dutch East Indies (now Indonesia). 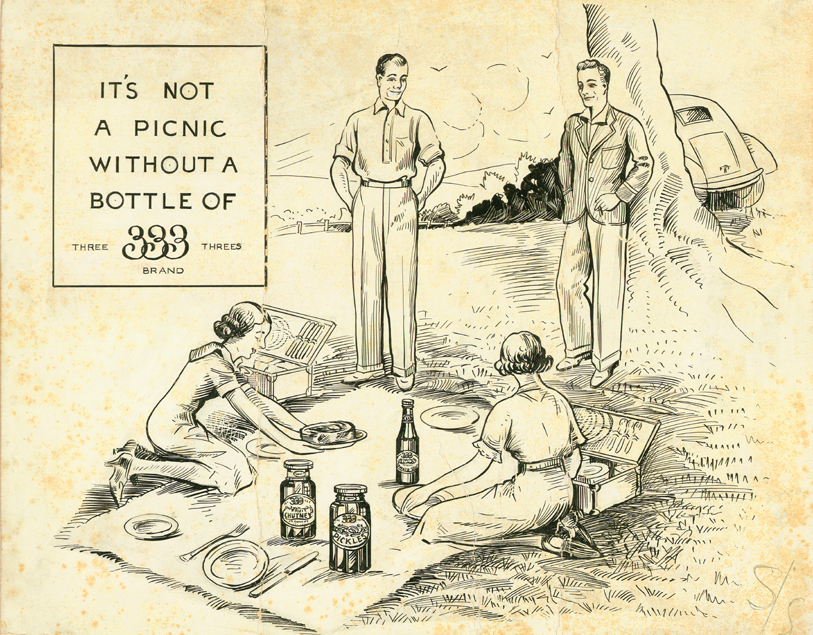 The Three Threes product range changed over the years. Advertising in the 1930s focused on pickles and fruit chutneys, and later lemon butter became another another popular line. There were a few early hiccups. In May 1935 Stanley McAlpine was fined £1 when his pickled onions were found to contain more than the permitted level of sulphides, while later the same year he collected another £1 fine for including starch in his lemon butter.

Subsequent generations introduced modern manufacturing equipment and augmented the range. In the 1960s, pickled onions, olives and gherkins were added. Lemon butter has disappeared, beetroot is now included, and in 2001 the company launched Mightymite, a competitor to Vegemite. Most products use primarily Australian ingredients.

While originally sold mostly in New South Wales, the product range is now available throughout Australia. The company also contract packs products for major supermarket chains Coles and Aldi and is active in the export market.