In 1928, a 23-year-old entrepreneur named Oliver Kenneth McAnulty, opened a processed cheese factory in Brisbane. His Maxam Cheese operation raised the ire of the Kraft Walker company, who accused him of infringing their patent. A court battle ensued, with appeal and counter-appeal going all the way to the Privy Council in Britain. McAnulty won, and became a significant Australia cheese manufacturer and meat canner. He sold the business to Swift in 1947, who sold the brand to Arnott’s in 1967.

Everyone who grew up in the 1940s and ’50s is familiar with Kraft cheese. The processed cheddar was developed in America and launched in Australia by the Kraft Walker cheese company in 1925. It had an almost unlimited lifespan (for a cheese) and needed no refrigeration, so could readily be transported and sold across this wide brown land.

But three years later a competitor arose, and under somewhat fishy circumstances. In subsequent court proceedings, Kraft alleged that Oliver McAnulty, the maker of Maxam Processed Cheese, had induced one of the Kraft Walker foremen to disclose the secret of how their cheese was made. A certain amount of money had changed hands, they said. It’s not recorded whether the said foreman lost his job.

Maxam Cheese worried Kraft enough for them to launch the law suit in 1929. In the first instance, they were successful. McAnulty was ordered to cease production and to pay costs. But he didn’t give up so easily. In an appeal to the High Court of Australia, the decision was overturned. But Kraft would not let the matter rest. They took it to the Privy Council in London which, until 1986 was still the final court of appeal under Australian law. There, again, McAnulty prevailed and the future of Maxam was assured.

The company became a significant cheese manufacturer, buying cheddar cheese from dozens of small cheese factories and helping to support the dairy industry of southern Queensland, particularly in the Darling Downs area. In the early 1930s, a number of laudatory articles appeared in Queensland papers, one styling McAnulty as a 28-year-old “Baron of Industry“. Not content with selling his cheese in Australia, the young entrepreneur began to export and by 1938 was selling his cheese in China, Palestine, Manila, the Dutch East Indies, the Malay States and India.

The meat and cereal processing department began operations in the late 1930s, and with the coming of World War II the company began exporting canned goods to Great Britain and supplying the military with canned rations. During the war, a staff of 400 produced two million cans of meat and cheese. Queensland Country Life revealed in 1942 that:

100 head of prime Queensland cattle, and tons of potatoes, beans and carrots are canned, in the form of a balanced ration, well-cooked and scientifically sealed, every day of the week for consumption in Great Britain…. 280,000 sausages, in 35,000 cans of eight sausages to each, are made, packed and cooked for use by the troops.

Not everything McAnulty undertook was successful, however, and while the press painted a rosy picture of the man and his business there’s some evidence that his ethics may have left something to be desired. First, there was the purported industrial espionage that allowed him to set himself up in opposition to Kraft. Then, in 1935, there was the episode of the Maxam Tropical Hampers. Despite grand plans for the export of hampers containing “the choicest of Queensland’s tropical products” in “neatly labelled glass jars” the scheme failed, leading to the bankruptcy of one Arthur Douglas Nelson. It appears Nelson handled the publicity for the project and was due fees plus a share of the profits, but received less than his due from Maxam. McAnulty was also prosecuted for the avoidance of income tax and sales tax. What’s more, labour relations at his factories were less than amicable, with strikes making headlines in 1942. 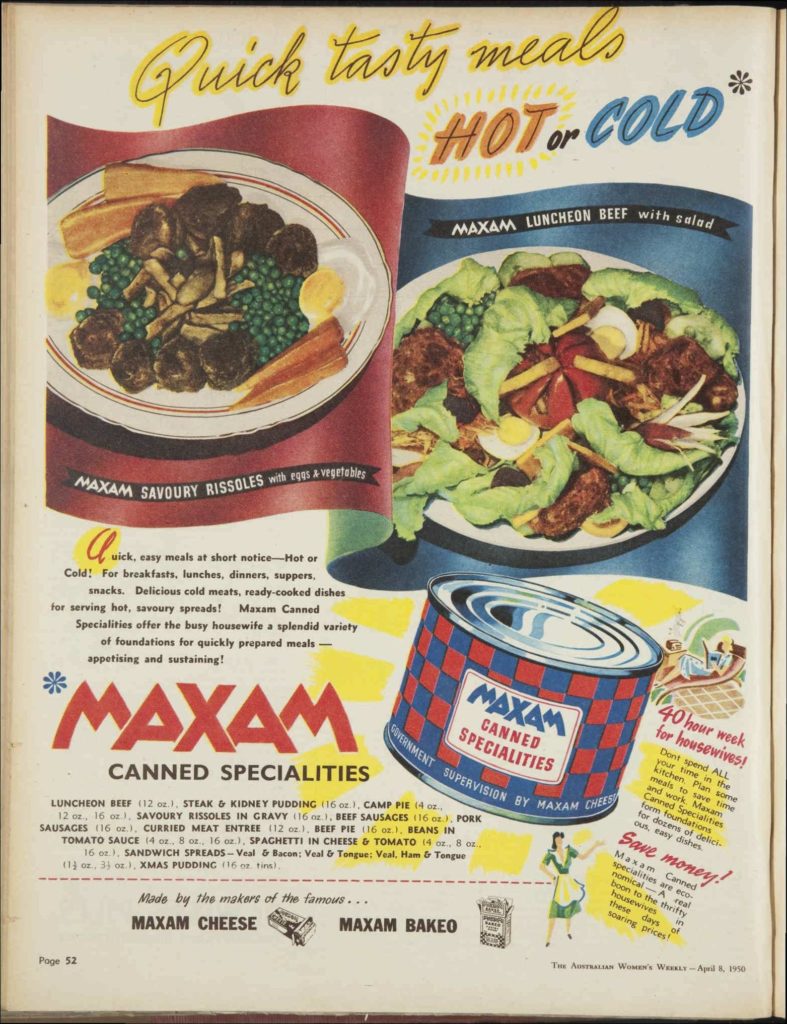 It seems that Maxam Cheese was still being sold in Queensland and New South Wales as late as 1967, when Swift sold the Maxam and Bakeo brands to Arnott’s. The Bakeo brand still survives. The market for canned rissoles – not so strong. It looks like they had disappeared from the range by 1953.