For decades, going to the movies involved either a pack of Jaffas or a a box of Fantales. The chocolate-covered caramels were introduced by Sweetacres in 1930. On their wrappers were, literally, fan tales – brief biographies of movie stars.  The tradition continues, with the stories updated every two years.

Reviewing the trade exhibits at the Perth Royal Agricultural Show in 1930, the West Australian newspaper reported a new confectionery line being distributed via the Nestlé Milk Company stand:

On the right of the pavilion are two windows where girls in costume are selling a variety of chocolates and confectionery made by the company, together with several products of Sweetacres, such as Minties, Talky Toffee and a new confection known as Fantales— a chocolate-coatcd caramel deluxe, wrapped in wax paper inscribed with information, concerning various well-known motion picture players. It was stated that the line had found considerable public favour recently. 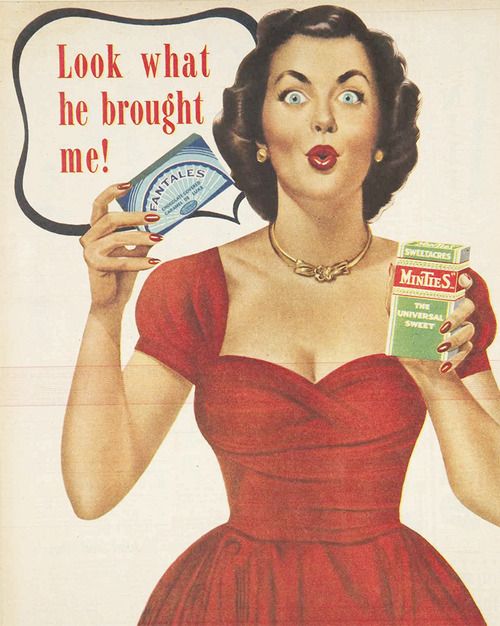 Nestlé was the sole distributing agent for Sweetacres throughout Australia. Today they own the Fantales brand, along with other famous Sweetacres products like Minties and Jaffas. Strangely, they’re marketed under the Allen’s brand – originally a competitor to Sweetacres.

Fantales arrived shortly after the ‘talkies’. Commercial movies with sound arrived in Australia in 1928 and along with them came more movie palaces. Admissions to the cinema increased by over 70 per cent, while admissions for every other kind of amusement declined. In the 1930s, movie stars like Humphrey Bogart, Clark Gable, Katharine Hepburn and Cary Grant captured the popular imagination. Sweetacres were on a winner.

The popularity of Fantales has endured. In a straw poll of The Canberra Times newsroom in 1988, they emerged as the most popular childhood lolly, beating out aniseed balls, humbugs, rainbow galls and cobbers. However, a BuzzFeed poll in 2014 put Fantales at No.11, with Caramello Koala coming out on top. Chocolate plus caramel. Seems to be a winning combination.