1932 Vita-Weat first made in Australia

Vita-Weat crispbreads were first produced by Peek Frean in the UK and were the foundation product when the biscuit company opened its Australian subsidiary in 1932.  Arnott’s acquired Peek Frean’s Australian operation in 1975 and Vita-Weat became part of the Arnott’s range.

Peek Frean was a British biscuit company founded in 1857. It’s not clear exactly when the Vita-Weat crispbread was introduced, but it was in the range by 1927. Early advertisements in the UK promoted the biscuit as an aid to digestive health, using the line “The bread of new health”. The original biscuits were square in shape – about double the size of the rectangular ones we know today. 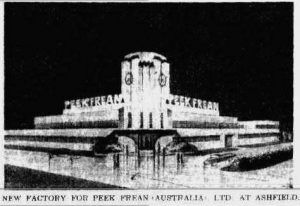 The company established a factory in Camperdown, Sydney, in 1932. At that time, Australia was an important export market for Peek Frean and setting up a manufacturing operation here allowed them to avoid import tariffs. Vita-Weat was their best-known product at the time. In 1937 Peek Frean moved their manufacturing to Ashfield, Sydney, where the building was commonly known as the Vita-Weat building. It is now a Bunnings hardware store.

In Australia, too, the biscuits were heavily supported by advertising, again stressing the health benefits. In the late 1930s, the company even invented a new medical condition called “starch heaviness”. A series of comic-strip style ads showed characters so debilitated that they had difficulty holding down a job or functioning in social situations. Switching from bread to Vita-Weat could work miracles, however. In one such ad, the revived businessman exclaims:

“Think, darling! A rise, a new job and a holiday cruise out to it – all thanks to the boss telling me about Vita-Weat.”

Quite a claim for a biscuit!

It seems that the crispbreads adopted their new, slimmer shape in the 1940s and in the 1950s the focus of the advertising changed from digestive health to slimming. 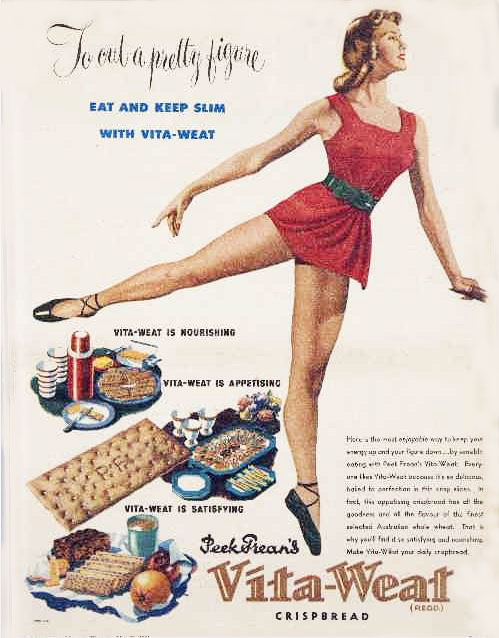 Despite the product’s popularity, the Peek Frean operation in Australia was struggling by the mid-1970s. Arnott’s and the American company Nabisco engaged in an acquisition battle for the company, with Nabisco arguing that an Arnott’s takeover would breach the Trade Practices Act’s anti-monopoly provisions. However, the Attorney General, Lionel Murphy, intervened directly to give the Australian company special approval, taking their market share to 73 per cent. 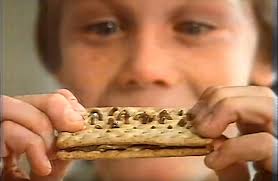 Vita-Weat were long known for the holes in the biscuit. When two biscuits were sandwiched together with butter and Vegemite, and squeezed, the resulting ‘worms’ delighted generations of children. It seems the manufacturing process has changed, the holes have closed up, and the ‘worms’ are no more.

Arnott’s have expanded the range to include several variants along with the ‘original’ Vita-Weat crispbreads.