1942 Instructions for American Servicemen in Australia

A 54-page  booklet titled Instructions for American Servicemen in Australia was produced for American forces stationed here during World War II. As well as general information about the country and its customs, the booklet made comments on Australian food. It highlighted the amount of meat Aussies ate, the amount of tea we drank and warned visiting Americans about 6 o’clock closing.

According to the booklet, vegetables and salads were not a feature of Australian eating.

Australians are great meat eaters — they eat many times as much beef, mutton, and lamb as we do — and a lot more flour, butter, and tea. But they don’t go in for green vegetables and salads and fruits as much as Americans. Some of the best fruits in the world are grown along the tropical coasts of Queensland, but the Australian, nevertheless, is strictly a “meat and potatoes guy”. 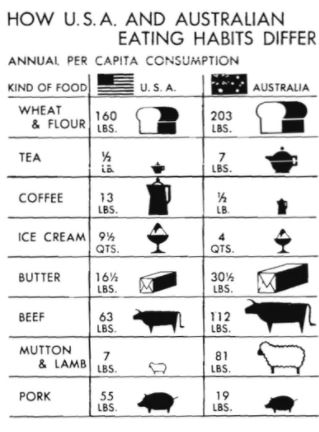 A chart included in Instructions for American Servicemen in Australia compared the two countries’ consumption of common foods. It seems Australians were lagging behind when it came to ice cream, coffee and pork, but way ahead with tea, beef and especially lamb.

The meat pie, still acclaimed by many Australians as our national dish, was identified as the most common snack food in the 1940s, although American-style snacks were obviously making inroads. The book got dim sims wrong though. Rolled in cabbage leaves?  I don’t think so.

Meat pies are the Australian version of the hot dog, and in Melbourne, the substitute for a hamburger is a “dim sin”, chopped meat rolled in cabbage leaves which you order “to take out” in Chinese restaurants. But because of the demand, hot dog and hamburger stands are springing up in large numbers. So you’ll probably see signs like this when you get around the country a bit: “500 yards ahead. Digger Danny’s Toasted Dachshunds.” But you won’t find drug stores selling sodas or banana splits.

Australia’s drinking habits, the booklet warned, would be quite foreign to visiting troops.

Drinking in Australia is usually confined to hotel bars, during the few hours they’re allowed to open – they close at 6 p.m. in most places. The main drink is beer — stronger than ours and not as cold. Hard liquor is fairly expensive and much less commonly drunk than in America. They also make some good light wines.

But the national drink is still tea, which you will .find is a good drink when you get used to it. Along the roads you’ll see “hot water” signs displayed — Australian motorists take along their own tea and for a few pence, from the roadside stands, they can get hot water and a small tin can (billy can) in which they brew their tea. But since the war began, there isn’t any motoring.

American influences on Australian food began long before World War II. American-style soda fountains arrived in the late 19th century and Coca Cola was first imported in the early 1900s. However, the influx of American servicemen during the war certainly accelerated the Americanisation of our eating habits – a trend that reached its peak with the arrival of the fast food giants in the 1970s.