The Australian Organic Farming and Gardening Society (AOFGS), founded in Australia in October 1944, was the world’s first organic farming society.  The association was based in Sydney, New South Wales, and the first issue of its journal, the Organic Farming Digest (OFD), was dated April 1946. 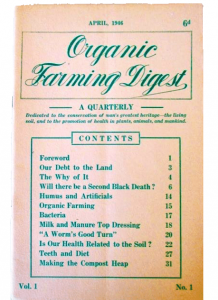 Although the term “organic farming” did not appear until 1940 in the United Kingdom, the fundamentals of organics owe much to previous farming movements. In the 1920s an Austrian, Rudolf Steiner, presented eight lectures on agriculture, in which he called for an agricultural process that was not dependent on chemical fertilisers and treated “the farm as an organism”.

Steiner’s ideas led to the development of “biodynamic” farming principles which were disseminated via the Agricultual Experimental Circle (AEC). By the end of the 1920s there were two Australian members of the AEC and within the next decade there were a dozen. In 1938, a lecture at the home of Walter Burley Griffin and Marion Mahoney Griffin at Castlecrag in Sydney presented the principles of biodynamics to the public for the first time.

In 1940, English farmer and agriculturalist Lord Northbourne wrote a book titled Look to the Land in which he argued for the benefits of “organic versus chemical farming”.  Northbourne was influenced by Ehrenfried Pfeiffer’s book Bio-Dynamic Farming and Gardening which had been released in 1938. A book titled Organic Farming and Gardening was published in America in 1942. It’s not clear which of these sources led to the term being adopted by the world’s first organic farming society, as Australians would likely have had access to both the English and American works.

The AOFGS published the world’s first set of principles of organic agriculture in 1952. Its journal continued to be published until 1954, albeit irregularly in its final years. the AOFGS was not supported by agricultural and horticultural societies and was defunct by the 1960s.

Rachel Carson’s book Silent Spring, which appeared in 1962, gave the organic movement new impetus and by 1972 the Organic Food Movement (OFM) was active in South Australia.  The Organic Gardening and Farming Society of Tasmania was founded in 1972 and in 1976 produced the first nationally successful organic magazine,  The Organic Gardener and Farmer (later Organic Growing).

Click here to see the full text of John Paull’s paper A history of the organic agriculture movement in Australia.