No doubt to the annoyance of the brand’s owners, the term ‘Esky’ is widely used in Australia as a generic term for a portable cooler box. The original Esky ® Auto Box was released by Malleys in 1952. It was the first of its kind in Australia, although there were similar products already available in the US. The brand name was registered in 1961.

In fact, Esky branded products had been around for many years by then. The history of Malleys, the makers of the Esky ® , goes back to 1884, when Francis Malley started his sheet metal working business in Sydney. According to the Powerhouse Museum, their first Esky® ice box was produced in that year. If so, the brand kept a low profile until around 1941, when it seems to have been first advertised. 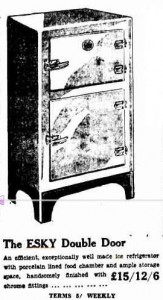 The Malley business expanded over the years, even opening its own chain of hardware stores. During WWII the company produced food containers, ammunition boxes and other items for the military. After the war, and by now a large concern, they concentrated on consumer goods including appliances.

The Esky advertised in 1941 was presented as the smaller version of Malley’s Eskimo Ice Refrigerator – “ideal for small homes and flats”. However, by 1946, the catchy Esky name was being applied to the top of the line model. When a retailer exhibited the Esky Ice Refrigerator at the 1946 Leeton Show, the local paper called it “a vast improvement on the old-time ice chest”. These units were made of steel with handsome chrome fittings and boasted a porcelain-lined food chamber. They were “insulated with the best materials” and the doors were airtight. Of course, they still relied on regular visits from the ice man.

The Esky ®as we know it

The first portable Esky ®, known as the Auto Box, appeared at the time when everyday families were just beginning to acquire cars. It was an insulated box made from galvanised iron “finished in lustrous green baked enamel and chrome”. It held six one-pint bottles and had a three-tray food rack. 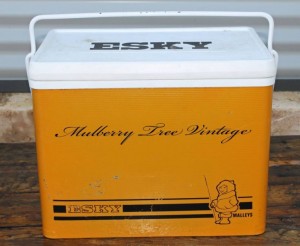 This marvellous invention, alternatively known as the car fridge, became a must-have accessory for picnics. The smiling Eskimo character became part of the logo in 1959. By 1960 it was claimed that half a million Australian households owned an Esky ® cooler. By then the design had been improved to include a lock-down lid, a drain hole for melted ice, a bottle opener and two-tone colour combinations.

In 1984, Nylex started to manufacture the Esky ®. At this point they were made of plastic, with some metal components. Over the years, the materials have changed and the modern Esky comes in a range of shapes and sizes. It is still made in Australia but is owned by the American camping and outdoor gear company, Coleman.