By all accounts, the first pavement café in Melbourne was at Mirka’s – the café opened by Georges and Mirka Mora on the corner of Exhibition Street and Little Bourke Street in 1954. In 1958, the Ress Oriental Hotel in Collins Street obtained permission to put 19 tables on the pavement, although alcohol could not be consumed there. The experiment lasted only two years, before police objections led to the council permit being withdrawn.

As early as 1909, the better-travelled among the local population were regretting that the pavement café was unknown in Melbourne. Melbourne’s Punch lauded the economy and variety of the city’s eating places, but added:

One may complain, however, that there are no Continental outdoor cafés. It would be pleasant to have breakfast or afternoon tea in Swanston or Collins-street—out on the pavements, under an awning, listening to a stringed orchestra, as in Paris—but dust and convention and the fear of small boys seems to prevent it.

Instead of becoming more Continental in character, it seems Melbourne regressed into a sober city, obsessed with respectability. In 1916, the temperance advocates succeeded in having pubs closed at six o’clock. The city’s Sundays were legendarily dull – pubs, shops and most services were closed. Every now and then, a brave voice would be raised, suggesting that Melbourne should be “livened up”. These brave souls were invariably taken to task by the moral majority.

It’s not surprising, then, that the first people to attempt a pavement café were from France. The Moras were the centre of a bohemian crowd of artists and others of Melbourne’s avant-garde. It’s not clear how long the café  lasted, but in 1957 the couple moved on to open the Café  Balzac in East Melbourne – an establishment that would later secure the city’s first restaurant licence. 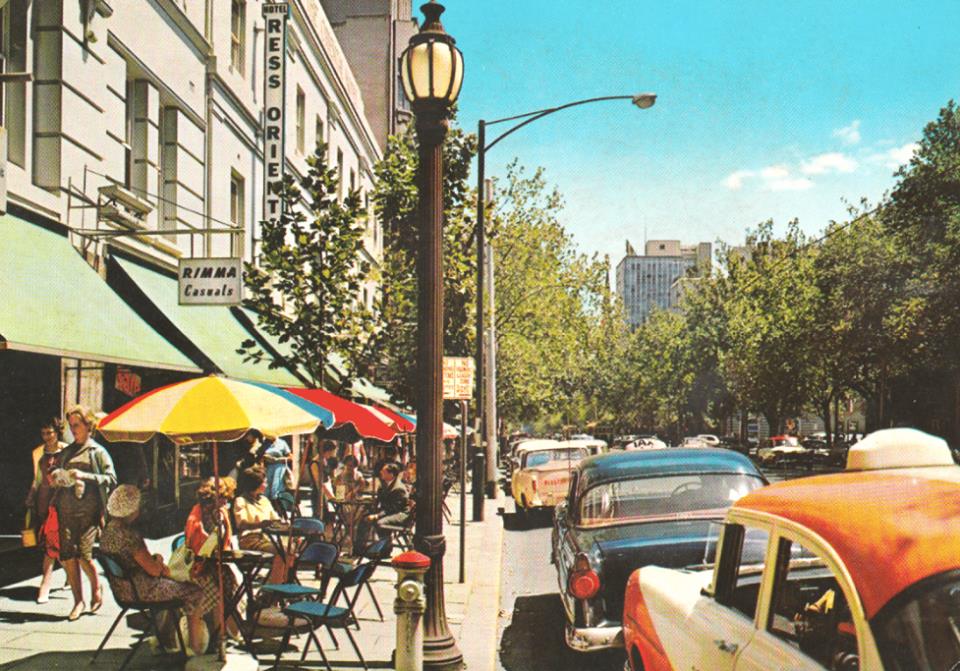 In 1958, Leon Ress obtained a permit to put tables on the pavement outside his Ress Oriental Hotel. Ress was a member of the city council at the time, which almost certainly helped his cause. The tables and umbrellas featured on postcards for the city and added to the ambience of the ‘Paris end’ of Collins Street. Claims that the “Paris end” soubriquet was a result of the Ress Oriental experiment are untrue, however, as the term was certainly in use by 1957.

It seems that other cafés, emboldened by Leon Ress’s example, also ventured onto the pavement.  In his article at eMelbourne, Andrew May names The New Maple BarCoffee Lounge and Gibby’s Coffee Lounge in Bourke Street and the Mimosa Coffee Lounge opposite the Ress Oriental.  This outburst of continental gaiety was not to continue, however. In 1960, the Police Traffic Branch ordered that the pavements be cleared, saying the cafés interfered with pedestrian and motor traffic.

Melbourne streets settled back into comfortable anonymity. It was to be some years before the pavement café became commonplace in the city and its suburbs.