In 1924, eight farmers in the Murrumbidgee irrigation area of New South Wales produced the area’s first commercial rice crop. They used seed from California, provided by the NSW Government. The industry progressed over the next decades and in 1950 farmers formed the Rice Growers Co-operative Mills Limited, based in Leeton.  In 1955, the co-operative launched its own brand of rice: Sunwhite.

The Rice Marketing Board for New South Wales was formed at the request of growers in 1928.  Its stated purpose was to “obtain the best possible monetary return to growers consistent with the maintenance of orderly marketing’. Five of the board’s seven members were elected by growers. Rice was acquired from growers and the Board handled marketing and export. Mills were constructed at Murrami, Yenda and Griffith. 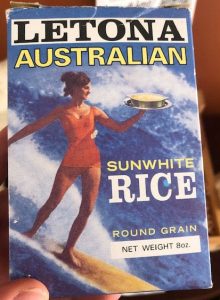 In 1950, the Ricegrowers’ Association, dissatisfied with the returns, formed a new co-operative to build a rice mill at Leeton in the Murrumbidgee irrigation area. Five years later, the co-operative launched Sunwhite Rice.  New mills were built, at Coleambally, NSW in 1968 and Deniliquin in 1970.

In 1986 the Rice Marketing Board appointed the grower-owned cooperative, then known as Ricegrowers Cooperative Limited (trading as SunRice), as its authorised buyer and agent, effectively merging the functions of the two organisations.  Through this agreement the co-operative receives, stores, processes and markets 99 per cent of Australian rice production. About 85 per cent of this is exported to more than 70 destinations, while the domestic market receives the remaining 15 per cent.

The Sunwhite brand is marketed in Australia and New Zealand, the Middle East and the Pacific Islands. SunRice has a range of other food brands including Always Fresh, Admiral, Captain, Riviana and Mahatma. SunRice also sponsors a two-yearly festival in Leeton. First staged in 1959 to celebrate the rice harvest, it was originally known as the Irrigana Festival, later the Rice Bowl Festival, and is now called the Leeton SunRice Festival.