According to the Australian Chicken Meat Federation, until the late 1950s chicken meat in Australia was mainly a by-product of the egg industry. The chickens that graced tables on special occasions were either spent laying hens or cockerels. Chickens were raised by family firms and “backyard operations”. Commercial operations gathered pace with the release of the first specially bred meat chicken variety in 1959.

When I was growing up in the 1950s, and even into the 1960s, chicken did not feature in our daily fare. It might be served as a special treat on birthdays, when one chicken was carefully apportioned to serve a family of six (mum, dad, grandma and three children). My mother was renowned for her ability to pick a chicken carcass clean, leaving no shred of tender meat. 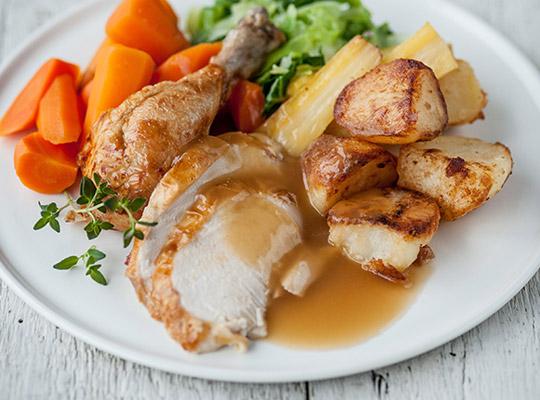 The wishbone was always carefully removed and left to dry on the window sill. We vied to be the ones to hook our little fingers around the delicate bone, close our eyes, make a silent wish and pull. If you were the one left with the larger portion, it meant your wish would be granted.

In 1956 Australians were eating just 5 lb. (2.3kg) of chicken per head per year. By 1965 this had risen to 15 lb. (6.8kg) per year and the cost per pound had almost halved.  Firms like Inghams and Steggles led the development of the specially bred meat chicken and modelled themselves on vertically integrated American operations. They controlled the breeding and processing, relying on contract farmers to raise the chickens.

Rotisserie chicken appeared in the late 1950s and by the time Kentucky Fried Chicken launched in Australia in 1968 there were around 80 store-front chicken shops in Sydney alone. The ready-roasted chicken, cooked on an infra-red grill called a Rotissomat or a Chicomat, soon had Australians eating more chicken. The rapid growth of Kentucky Fried accelerated the trend.

In the supermarkets, chickens appeared in the freezer cabinet. Puchasers were warned to thaw out their chickens properly (in the refrigerator) to avoid the risk of food poisoning. It wasn’t until the 1980s that fresh chicken took over from frozen, and chicken pieces became more popular than whole chickens.

Around 1980 the another fast food optional arrived : charcoal chicken. Cooked, as its name implies, over charcoal rather than an electric grill, it replaced rotisserie chicken as the preferred roast chicken takeaway. By 1990 Australians were consuming 23.7kg of chicken each per year.

Despite this, the supermarket ready-to-eat roast chicken remains a trusty fall back when you can’t be bothered cooking. At the centre of a price war for some time, a nicely browned stuffed chook is generally available for around $10 a pop. It’s not a special occasion treat any more.  And does anyone still save the wishbones?