The chocolate Bertie Beetle was launched by Hoadley’s in 1963 and is generally supposed to have been created as a way to use up fragments of honeycomb left over from making the company’s famous Violet Crumble bar. It is made from milk chocolate containing small chips of honeycomb. A white chocolate version with caramel chips was later developed, but discontinued. At some point after Rowntree’s took over Hoadley’s in 1970, the product was withdrawn from sale in shops and could only be purchased in a showbag at the Royal Shows and Exhibitions in various states. 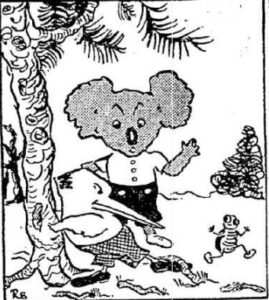 “Bertie” seems to have been a name associated with beetles for several decades before the Hoadley’s product was launched. In the 1930s, Bertie Beetle was a character in a series of stories in the children’s section of several Australian newspapers. Written by “The Sandman” the series featured Will Wattlegum (a koala) and Clarence the kookaburra.  There was also an author in the 1940s who, under the pseudonym of Bertie Beetle, produced a children’s book called Gilbert the Guinea Pig and Other Tales.

Like the famous Freddo Frog, Bertie Beetle (the chocolate) has been transformed over the years. Bertie was originally beetle-shaped, tightly wrapped in printed foil and sold for threepence. The foil wrappers highlighted the beetle’s beautiful spotted wings. Australian artist John Perceval was so taken with the wrappers that in 1968 he created an artwork made up of nearly 80 of them.  But, like Freddo, the beetle eventually took on a more human-like form and became the grotesque cartoon character in the blue plasticised package we recognise today.

Hoadley-Rowntree was bought by Nestlé in 1988. There is a certain amount of misinformation circulating on the web saying that in 1970 “manufacturer Nestlé entered an exclusive agreement with ‘Showbag Marketing” to only sell the chocolate at shows and exhibitions in showbags”.

It’s not clear whether Hoadley-Rowntree negotiated such an agreement, or whether Nestlé did so at a later date.  It’s true, though, that Bertie disappeared from the local shop. Perhaps absence did make hearts grow fonder, as the Bertie Beetle showbag has since proved one of the most popular, reportedly selling more than 250,000 at the Brisbane Ekka in 2017.

Fans of the brand no longer have to wait for showtime to roll around, as bulk packs of the chocolates can be purchased online at any time of year. In 2018 the Bertie Beetle Huge Haul included 350 (yes, 350!) of the chocolate beetles plus a giant plush toy. You’d have to be a fan! In January 2019, Peters Ice Cream released an ice cream version, exclusively through Woolworths.