It’s not clear when the first of the Golden Fleece branded restaurants was opened – perhaps in the 1950s or as late as the early 1960s. In 1964 the fuel company ran a national advertising campaign and made a big push into country areas, recruiting  local operators and advertising for an experienced chef and a senior waitress to travel the country and supervise standards. Before the advent of American fast food chains, Golden Fleece roadhouses were the go-to food stops for travellers. During the 1960s and early 1970s Golden Fleece operated the largest chain of restaurants in Australia.

Golden Fleece was the brand name of H. C. Sleigh and Company, an Australian fuel company that pioneered the single-brand service station. The symbol of the company, the golden ram, was evidently modelled on a prize-winning ram known as David of Dalkeith. Initially importing petroleum from the USA, the company later obtained its product from the Caltex refinery in Sydney. 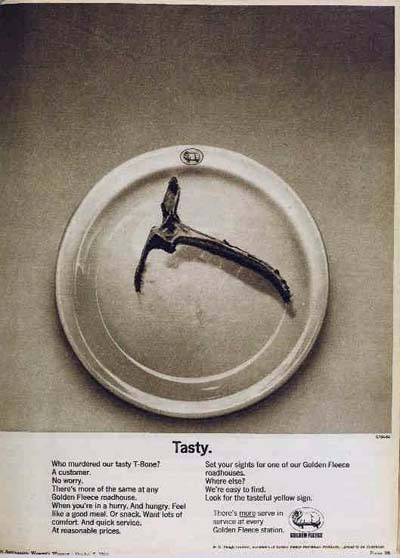 The Golden Fleece roadhouses served a range of home-style foods as well as standard offerings such as sandwiches and pies. A rather bizarre advertising campaign in 1964 showed, in black and white, a naked T-bone with the headline “Tasty”. The copy began: “Who murdered out tasty T-Bone?” Maybe it won some copywriter or art director an award, but anything less appetising can hardly be imagined.

It seems that, initially, the roadhouse menus varied. One former patron recalled: “We would stop when on holiday and get sandwiches for lunch and as a holiday treat, Dad took us for tea on one night and the mixed grill was the best. The baked beans on toast were pretty good and the milk shakes also.”  However, a former waitress recalled that later on the menus were standardised across the chain.

Other fuel companies also offered roadhouse restaurants. In 1955 the first roadhouse in Port Wakefield, South Australia, opened. It’s claimed by local historians to have been only the second roadhouse in South Australia. In 1957 it commenced operating 24 hours a day. Horsham’s Caltex Star Cafe opened in 1957, competing with the Mobil roadhouse opposite and the Shell roadhouse nearby.

In 1981, Caltex took over the Golden Fleece service stations and the iconic golden ram sign gradually disappeared. As McDonald’s and Kentucky Fried Chicken made greater inroads into the market, the importance of the traditional roadhouse as a preferred stopping place declined. Roadhouses persist, though, on Australia’s highways and, particularly, in the far reaches of the outback where there aren’t enough customers to attract the popular food chains.