A 1966 research paper by agronomist Dr John Gladstones suggested that the Margaret River area in Western Australia would suit viticulture and had similarities to the French wine producing area of Bordeaux. His findings, and those of American expert Professor Harold Olmo, encouraged Perth cardiologist, Tom Cullity, to plant vines at his property Vasse Felix in 1967.

John Gladstones’ primary interest wasn’t vines, it was lupins. He was an agronomist at The University of Western Australia and then at the WA Department of Agriculture.  In the 1950s he had visited Margaret River several times and had even grown a trial patch of lupins there. With a personal interest in wine and viticulture, he began to study the elements of “terroir” – the combination of climate, soil and landscape that influences the biology of the vines. 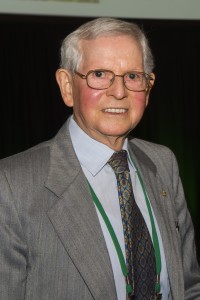 In 1965 he published a paper titled “The Climate and Soils of South Western Australia in Relation to Vinegrowing”. The following year, a second paper identified Margaret River as having the potential to produce premium wine. In the 1966 paper, Gladstones said that to be suitable for viticulture an area should: “carry redgum or marri trees, rather than jarrah, banksia or sheoak, it should have no swamps or their denizens such as paperbarks, a brown or reddish-coloured soil and gentle slopes to provide drainage but not erosion.”

Grapes had been planted in the Busselton/Margaret River area more than a century earlier. The local historical society records that a commercial vineyard was operating as early as the 1850s selling wine to American whalers.  Another small vineyard and cellar door, run by one Giacomo Meleri, was trading at Yellingup from 1920 t 1950. However, the name for Meleri’s wine – Red Dynamite – would lead one to believe it was not of optimum quality.

In 1966, the Kevin and Diana Cullen planted an experimental acre of vines on their land in 1966, but they were accidentally destroyed and the Cullens didn’t replant until 1971. Perth doctor Tom Cullity planted his Vasse Felix vineyard in 1967, hence their claim to be the foundation vineyard in Margaret River.

Gladstones has written other works on viticulture, including the comprehensive “Viticulture and Environment” published in 1992. He has received many awards from the wine industry. In 1994 he drew up the boundaries for the Margaret River wine area, which officially became one of Australia’s geographical indications in 1996.