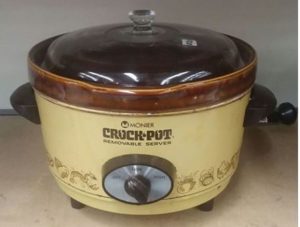 Crock-Pot is a brand name for a bench-top electric slow cooker. The idea dates back to 1940 in the USA when Irving Nachumsohn (known as Naxon) patented a similar device that eventually went to market as the Naxon Beanery. In 1972, it was re-launched in America as the Crock-Pot and seems to have first appeared in Australia under the Monier brand in 1973.

The device Naxon invented was inspired by a traditional Lithuanian Jewish dish called cholent – a spicy stew of beef, beans, marrow bones and barley. Observant Jews were not supposed to work on the Sabbath, which meant no cooking. So the stew was prepared on Friday, the ovens were turned off, and the dish cooked slowly in the residual heat until Saturday evening, ready for eating after sundown. 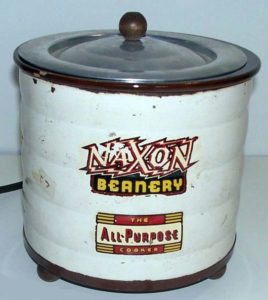 Naxon’s cooker distributed the heat evenly around the central cooking vessel, allowing the contents to cook slowly. His Naxon Beanery was available from the 1950s and acquired by the Rival Manufacturing company in 1970. They re-named it the Crock-Pot and, at a time when women were increasingly entering the workforce, marketed it as a boon to the working woman.

It’s not clear why Monier, best known for concrete products, brought the Crock-Pot to Australia, but it was part of a range of kitchen appliances that was eventually sold to Sunbeam in 1981. Early Monier advertising shows the 4-litre Crock-Pot, ‘in rich orange’, on sale for $39.95.

It became the glamour appliance of the 1970s. A recipe feature in The Canberra Times in 1975 pushes its advantages for ‘working wives’ – it seems men were still unlikely to play a role in preparing the family’s meals. The editorial reads:

SLOW methods of cooking allow the cook a certain amount of latitude in the time of serving food and make palatable and nutritious dishes from economical ingredients.

The recipes given are provided for use with the Monier Crock-Pot (an electrically heated ceramic pot) and have the advantage that they, may be cooked over-night, without attention while cooking. The lengthy cooking-time provides freedom for working wives with an instant meal at the end of a working day.

The feature went on to give recipes for a range of exotic dishes, including Goulash, Beef Curry, Beef Catalan, Cassoulet, La Garbure and Flemish Carbonnades. Cooking guru Margaret Fulton embraced the new technology, bringing out The Margaret Fulton Crock-pot Cookbook in 1976. 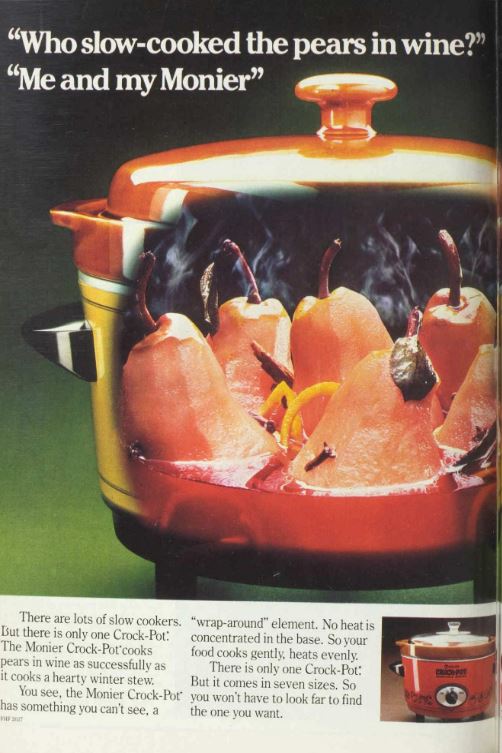 Soon other manufacturers began to release their own versions of the slow cooker and Monier began to spend advertising dollars on protecting its brand. It was a losing battle, as ‘crock-pot’ became a generic term like Sellotape and Band-aid. When Sunbeam acquired Monier’s appliance division in 1981, it too fought a rear-guard action against competitors, asserting that ‘Crock-Pot is a registered trademark’.

By the early 1980s, though, the gloss seems to have worn off the idea of slow cooking. Classified advertisements through the ‘80s are full of attempts to unload the appliance, with a large number of them describing their Crock-Pots as ‘hardly used’ or ‘as new’.

They’re still around though. Instead of the lovely autumn tones of the ‘70s, they’re stainless steel with an internal ceramic dish that’s black rather than a folksy brown. And in the USA, there’s even a smart Crock-Pot with built in wifi so you can control it from an app on your mobile phone.  One reviewer called it ‘a solution in search of a problem’. But perhaps it proves that a good idea never dies – it simply adapts to changing times.