The savoury slice is a truly regional dish, apparently found only in a tiny pocket of South Australia around the town of Murray Bridge. It was reportedly invented in the early 1970s (some say 1975) by the original owner of what is now McCue’s bakery. It consists of two sheets of puff pastry sandwiched together with minced meat gravy, topped with cheese and bacon bits and baked. It is often eaten in a flat white roll.

Murray Bridge (previously known as Mobilong and Edwards Crossing) got its name when a railway bridge was constructed across the Murray River in 1924. It’s about 75 km from Adelaide to the north of Lake Alexandrina – evidently far enough from the SA capital to develop its own food culture.

While some attribute the invention of the savoury slice to Murray Bridge’s Arcade Bakery, which burned down in 2001, others insist that McCue’s (or whatever it was called back in 1975) was the place of origin. Today, though, McCue’s is clearly the keeper of the flame, even advertising their business as “Home of the famous Savoury Slice”.

On its own, the savoury slice seems like a hearty mouthful. However, the locals insist that the best way to eat it is sandwiched in a flat buttered roll. Not one for those on low-carb diets. 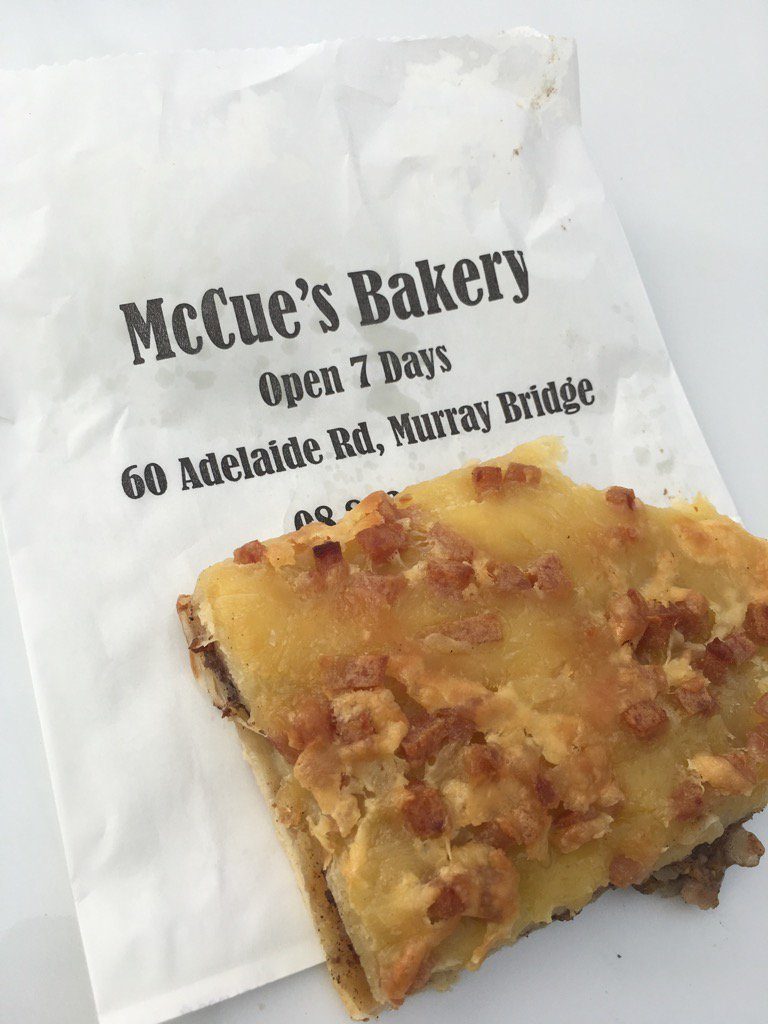 It appears versions of the dish can also be obtained in nearby Tailem Bend and Balhannah, but the McCue’s version is the most famous, even being sold in a four-pack for $12.49 (2019 price) in the Murray Bridge IGA Supermarket. McCue’s also have a pie cart which, no doubt, dispenses them in a range of different locations.  You can, of course, make your own. The recipe is not very complicated. Just glue two pastry sheets together with a layer of meat sauce, cover one side with cheese and bacon and throw it into the oven.

The savoury slice isn’t the only oddity you’ll find in Murray Bridge. Cottage Box Chocolates have their own take on a classic Australian flavour: chocolate coated Vegemite fudge. They also have chocolate laced with Murray River salt flakes as well as locally grown apricots dipped in chocolate.