The Pollywaffle chocolate bar was introduced in 1947 by Hoadley’s Chocolates. It consisted of marshmallow inside a chocolate coated wafer tube and became a longstanding favourite with generations of Australians.  Hoadley’s were taken over by Rowntree, then by Nestlé, whose Kit Kat product ate into the Pollywaffle market share. It was discontinued in November 2009. But in January 2019 Robern Menz announced they had bought the brand from Nestlé and planned to manufacture it in Adelaide. 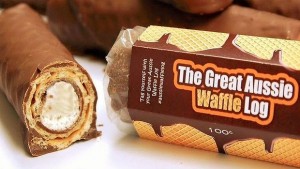 Although the Pollywaffle ceased to be viable for Nestlé, it had an army of devoted fans. They started a social media campaign to have their favourite reinstated. Although they didn’t get a response from Nestlé, a Melbourne company, Chocolate Works, saw potential in reviving the product and in 2015 they announced that it would soon be back on the market.

It seems that they couldn’t call it a Pollywaffle, presumably because they didn’t want to cough up the money to buy the brand from Nestlé. Instead it’s called The Great Aussie Waffle Log. The name was a big part of the magic, so it failed to take the country by storm.

Then, in January 2019, South Australian confectionery company Robern Menz announced that they had plans to revive the product. The company acquired another legendary Hoadley’s product, Violet Crumble,  from Nestlé in 2018 and hope the purchase of Pollywaffle will build on that success.

Robern Menz is well-known in South Australia for a number of local favourites, particularly FruChocs – balls of peach and apricot pulp coated with chocolate.