In March 2020, in an unprecedented wave of panic buying, supermarket customers cleared the shelves of non-perishable foods including canned foods, pasta, rice and flour, as well as commodities such as toilet paper and tissues. The rush was generated by fears of being isolated at home owing to the outbreak of the novel Corona virus COVID-19.

The new Corona virus was identified in early January 2020 in the Chinese city of Wuhan, where dozens of people had been affected. The first death occurred on 11 January. Cases were confirmed in Japan, South Korea and Thailand by January 20 and Australia’s first case was reported just days later. By mid-March there were more than 800 reported cases and dire measures were taken by the Federal Government to restrict immigration, quarantine returning travellers, ban large gatherings and, finally, close Australia’s borders.

The impact on the restaurant and café business was dire – initially only establishments seating fewer than 100 could continue and even then patrons were staying away. Many attempted to cope by moving tables further apart and making appeals on Facebook and by email for customer support.  Some establishments proposed to make all transactions card only, to avoid handling possibly contaminated cash.

Later, all restaurants, pubs and cafés were forced to close completely to sit-down customers, although take-away service and home delivery could continue. Some re-invented themselves as retail outlets, selling off their wine stocks, ingredients and pre-prepared meals. As restrictions continued, even top-end restaurants began to offer pick-up and home-delivery options in order to keep their businesses afloat.

The prospect of people being isolated in their homes for 14 days or more prompted calls to stock up on essential food and supplies, which in turn caused shoppers to fill their trolleys with staples that could be stored indefinitely, including canned foods, pasta, flour and rice.  Soon empty shelves became the norm in supermarket, despite assurances that the food supply would not run out and that panic buying was unnecessary. 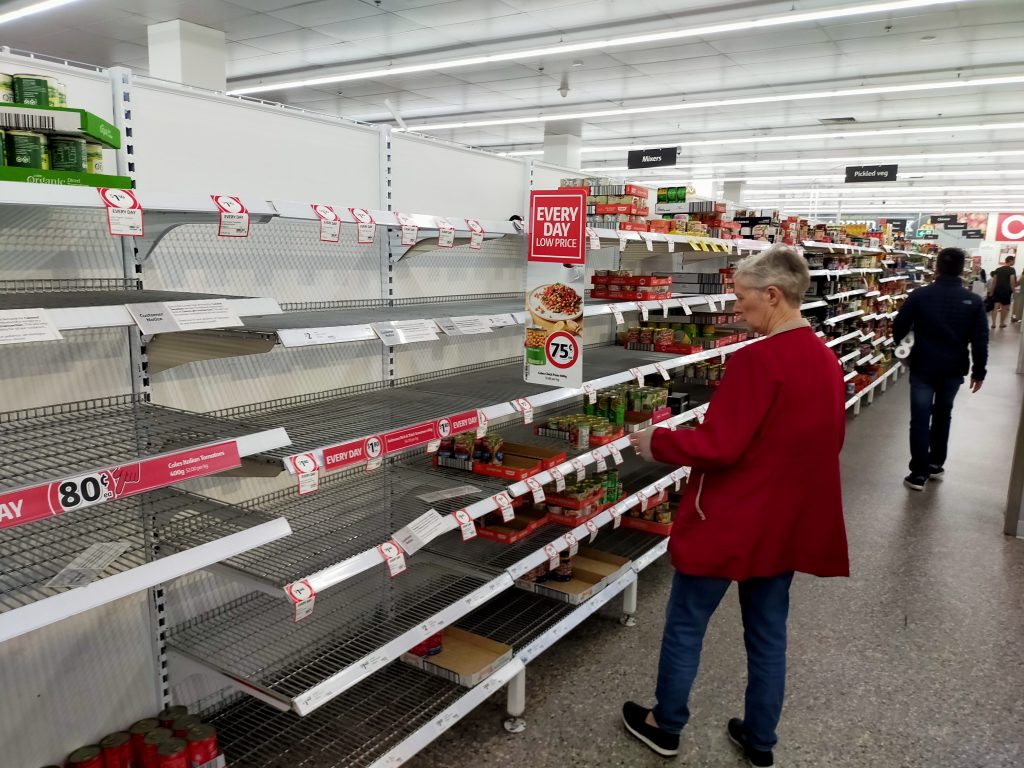 Country towns found  busloads of city people descending on their local store to clear out the shelves. Some employed security staff to manage the situation and tell “out-of-towners” that they were not welcome. The major chains put limits on the most sought-after items including hand sanitisers, toilet paper, and various foods.

As major supermarkets employed more people to stock shelves, supply chains were re-engineered and, presumably, home pantries filled up, the situation began to ease. Some items remained difficult to find but in general shelves were adequately stocked. The Corona virus prompted other changes though. Dispensers outside stores provided wipes to clean trolley handles and, to maintain social distancing requirements, only a certain number of shoppers at a time were permitted in the store.