Prior to European settlement, Australia’s indigenous people were primarily nomadic, moving from place to place to hunt and gather food. They had a deep understanding of the land, the seasons and the food sources. It is now recognised that they exerted considerable control over their environment, using methods including fire, taboos, grain harvesting and storage, fish and eel traps and some planting to ensure continuity of food supply.

Aboriginal people may have arrived on the Australian continent as early as 60,000 years ago. At that time, many species of megafauna still existed. There is some evidence that the arrival of humans caused or contributed to their extinction. Remains of these animals have been found close to aboriginal artifacts. Traces of blood and hair on the tools found match the megafauna species. The practice of “firestick farming” – the burning of the undergrowth – may also have contributed to the extinctions by reducing the available food for the large herbivores.

The aboriginal calendar defines the seasons according to the changing availability of fish, animal and food-plant resources. When the Europeans arrived, aboriginal food sources included kangaroos, wallabies, bandicoots, possums, lizards, other animals, and birds that were hunted with spears, boomerangs and stone axes. Firestick farming opened up pasture lands and encouraged new growth, attracting game animals and making them easier to capture. 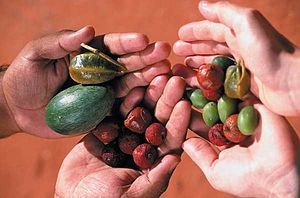 Aboriginal people also collected yams and other plant roots, fruits, vegetables, seeds, leaves and honey. The cultivation of food crops was more widespread in the Torres Strait Islands, where bananas, taro, coconuts and yams were grown. However, there is evidence that, even where crops were not specifically planted, certain conservation measures were practised.  For example, enough roots were left in the ground to produce new plants in the future. When eggs were gathered from nests, some were left behind.

In central Australia, witchetty grubs were commonly eaten. These are the larvae of several species of moth, found in the roots of certain shrubs and trees. In the alpine regions of New South Wales, aboriginal people would gather at certain times of the year to feast on Bogong Moths. The moths were ground to a paste between stones.

In other parts of Australia, Indigenous people constructed elaborate fish and eel traps in creeks and rivers. Fish were hunted with spears and nets. Middens along the ocean shorelines show that shellfish and crustaceans were also important aboriginal food sources.

Wild millet was the principle grain. It was a practice to harvest the grass while it was green and pile it in heaps to ripen. The heaps were then threshed to release the seeds. Early food technologies including grinding seeds to produce flour and processing poisonous cycad nuts either by leaching in running water or fermentation.

Because Australia’s aboriginal people ate a wide variety of foods, they were not dependent on a single food source. Their nomadic lifestyle was well-adapted to the changing environment, allowing them to move to areas where new foods could be found. >State Library Victoria:Indigenous foods