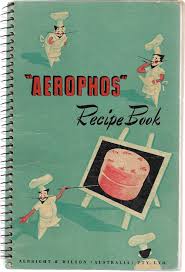 Issued by the “manufacturers of AEROPHOS food phosphate raising ingredients”  the Aerophos Recipe Book was a fixture in many Australian kitchens during the 1950s. The introduction states that “Cooking is the most important part of running a home, and…the housewife has ample opportunity of making her cooking an expression of her own individuality.”

The Aerophos Recipe Book was issued by  Albright & Wilson, a company that still makes rising agents for baked goods. It’s product  AEROPHOS P, they say, is “an extremely versatile chemical aerator suitable for prepared mixes, self-raising flour or the production of baking powders”. Until 1991, the company was jointly owned by ICI Australia & NZ Ltd and the Albright & Wilson parent company in Britain. It is now a subsidiary of the Singapore-based Universal Interchemical Corporation Pte Ltd.

Albright and Wilson did not make self raising flour themselves, but took the unusual step of branding their rising agent, saying that ‘Over 90% of Australian self-raising four is made with “AEROPHOS,” THE Australian raising ingredient” and urging cooks to look for the name on the packet.

The book was developed by a home economist named Lorraine Salmon, who worked for O’Brien Publicity, one of Australia’s earliest advertising agencies. During her advertising career she adopted the pseudonym ‘Marjorie Carter’ and, for six years, spoke on the radio, at CWA meetings, schools and technical colleges promoting the virtues of this modern Australian product.

Unsurprisingly, the Aerophos book is heavy on desserts, cakes and biscuits (around 90 bespattered pages in my edition) while meat and poultry receive somewhat scant attention ( 21 pages).  Meat recipes tend to the basic, including several variations on the theme of “White Stew”.

This dish requires the cook to put meat (which may be chops, breast of lamb, tripe, veal steak, brains, poultry or rabbit) into a heavy pan with onions and 1 pint of water or stock. After cooking for 1 ½ to 2 ½ hours,  half the liquid is poured off and replaced with ½ pint of milk blended with 3 tablespoons of flour. It is then cooked until thickened and seasoned to taste. To add horror upon horror, a variation suggests making ‘Cream Curry’ by adding two dessertspoons of curry powder and a sliced apple to the basic stew.

It’s not clear whether Ms Salmon developed these recipes herself. If so, she has a lot to answer for.