The inventor of Aeroplane Jelly was a tram driver.  Bert Appleroth first made jelly crystals at home in his bathtub and began distributing them along his Sydney tram route. He subsequently formed a company called Traders Ltd with a partner, Albert Francis Lenertz and the brand was launched in 1927.

From the beginning, the brand was heavily promoted. The famous Aeroplane Jelly song was written by Lenertz. It first went to air on Sydney radio station 2KY in 1930. The commercials were broadcast live, so the singer, three-year old Jennifer Paykel, had to be taken to the studio two or three times a week to perform.

The jingle was first recorded by Amy Rochelle, a music hall entertainer who did child imitations. However, the most popular version was recorded in 1938 by a seven-year-old girl, Joy King, who won a New South Wales-wide competition. Another finalist in the competition to find a vocalist for the jingle, Tommy Dawes, was the model for the image of the whistling boy who appeared on packaging for 40 years. He was paid 10 guineas for his services. 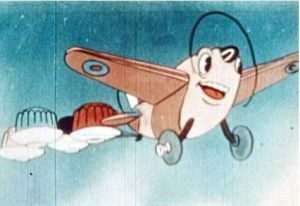 In the 1940s, the jingle was played up to 100 times a day on Sydney radio – a saturation campaign that was unequalled at the time. The  brand was also promoted in other ingenious ways, including filmed advertisements in cinemas and jelly being dropped from a plane onto Sydney beaches. You can see an early cinema ad here. One of the first commercials on Australian television in 1956 was a spot featuring the Aeroplane Jelly song.

In 1942 another character was created for a cinema advertisement: Bertie the Aeroplane. Bertie later became Bertie the jet for an advertisement released in 1954. In 1966, the famous jingle was recorded in Greek, Italian, Russian and Croatian.

The brand is still around and the range has expanded considerably to include mousse, jelly slices and cheesecake.