In 1865, William Arnott opened a bakery in Newcastle supplying goods to local people and visiting ships. Among his products were ship’s biscuits. He opened his first factory, known as William Arnott’s Steam Biscuit Factory, in 1875 and launched the famous Arnott’s Milk Arrowroot biscuits in 1882. The well-known parrot logo, which still adorns Arnott’s trucks, was introduced in 1888.>Arnott’s Ltd. History

William Arnott emigrated from Scotland with his brother in 1848. He worked as a baker in Maitland, New South Wales, before a brief period spent on the gold diggings.  Returning to Maitland in 1853 he established another bakery business which was repeatedly destroyed by floods. He moved to Newcastle in 1865, where his business was successful enough to allow him to repay his Maitland creditors within a year.

The Arnott’s Steam Biscuit Factory was established in Newcastle in 1875 to produce a range of plain and sweet biscuits and cakes. By 1882 the company was sending biscuits to Sydney by ship, then, by the end of the decade, by road. In 1894 the first Sydney factory began operations. 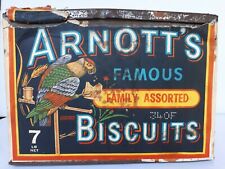 William Arnott died in 1901 but his sons continued to run the business, introducing many new biscuits. In 1906, Iced Vo Vos and SAOs were launched, while other new products at the time were Malt’O’Milk, Keil Fingers (later called Scotch Fingers), Ginger Nuts and Milk Coffee.  A new factory was built at Homebush as the company continued to grow. By the end of that decade the company had around 150 biscuit varieties in the range, including the Monte Carlo, introduced in 1926. The Family Assorted range appeared around 1924, available in 7lb (3.2kg) and 4lb (1.8kg) tins.

Arnott’s continued as a family-run business into the 1960s, expanding by consolidating with other well-known baked goods businesses including Adelaide’s Motteram & Menz, Western Australia’s Mills & Ware, Queensland’s Morrow, and Melbourne’s Brockhoff Biscuits, Swallow & Ariell and Guest’s.  It became a public company in 1970 and in the 1980s the Campbell’s Soup Company acquired a 14 per cent share.

Over following decades, Campbell’s gradually increased its holding until, in 1997, the American company gained full control. In the mid-2000s Arnott’s claimed to hold more than 70 per cent of the Australian market with its products found in 97 per cent of Australian homes.

In late 2018, Campbell’s put Arnott’s up for auction, raising the possibility that the famous Australian brand might return to local hands. However, it was announced in mid-2019 that Arnott’s had been sold to Kohlberg Kravis Roberts, a private equity group based in the US.  According to reports, the group is famous for buying and selling, rather than holding assets, so there are likely to be further ownership changes in the future.