The toy teddy bear had only been around since 1903 and was named after the American president Theodore Roosevelt. It seems he was an avid hunter, but was lampooned in a cartoon after refusing to shoot a tethered bear after an unsuccessful hunting trip. His sparing the life of the poor animal became a popular story and a Brooklyn toymaker presented a toy bear – “Teddy’s Bear – to the president. The fad for teddy bears quickly caught on. 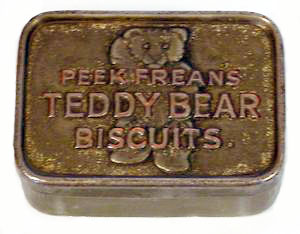 It’s not recorded who invented the biscuit version. There is a Peek Freans advertisement which may date from 1905. An advertisement which appeared in the Kansas City Times  in 1907 declared “The Teddy Bear Biscuit has been a popular article from the very start. It is the latest product of Loose-Wiles and is a delight to the children. Per box 5c; 6 boxes 25c.” Loose-Wiles was a Kansas City company which operates today as the Sunshine Biscuit Company. 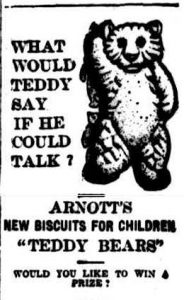 The appearance of the Teddy Bear Biscuit has remained remarkably consistent over the years.  The advertisement at left, from 1913, shows that Arnott’s copied the Peek Frean’s design almost exactly, as did the Melbourne biscuit company Guest’s.  Perhaps there was a licensing arrangement allowing various biscuit companies to use the design. It’s also not clear whether the Teddy Bear disappeared from the Arnott’s range at some point, while the biscuit continued to be one of Guest’s most popular products. The point became moot, however, when Guest’s merged with Arnott’s in 1962. 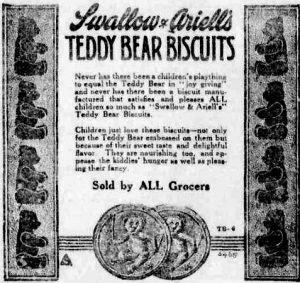 Swallow and Ariell, another Melbourne company, had their own Teddy Bear Biscuits by 1916. However, instead of being shaped like a waving teddy, they were plain round biscuits with an image of a teddy bear embossed on them.

The classic biscuit itself is rather plain, although it surprisingly featured among the top ten favourites in a poll conducted by the Northern Territory News in 2019 (it came it at No. 7). There is a chocolate coated version, originally introduced by  Guest’s.

Arnott’s capitalised on the popularity of Teddy Bear Biscuits by introducing Tiny Teddy Biscuits in 1990. They proved to be one of the company’s most successful and enduringly popular products.