In 1907, the  Mildura Raisin Trust and the Renmark Raisin Trust joined to become the Australian Dried Fruits Association (A.D.F.A.). The two organisations had been established in 1895 to protect the interests of dried fruit growers in irrigation areas along the Murray River.  A.D.F.A. is now known as Dried Fruits Australia.

The dried fruit industry developed as a solution to a transport problem. When grape growers moved into the new irrigation areas along the Murray in  the 1890s, they were promised rail transport to  Melbourne. The railway was slow in coming, finally reaching Mildura in 1903. In the mean time, the river and rail journey via Echuca saw fruit spoiling along the way. Growers began to dry their grapes for freighting to city markets. 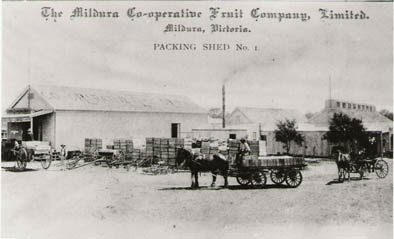 Growers’ associations were formed to regulate prices and promote their produce. Initially the Australian Dried Fruits Association represented only growers of vine fruits but later expanded to include stone fruit producers in Leeton and Griffith, New South Wales.  From the 1920s, the A.D.F.A’s emphasis was export sales, mainly to Britain. There the local product faced competition from South Africa, California and Greece. Many soldier-settlers, returning from WWI, became fruit growers, but their success caused the problem of over-production at a time when the world market was depressed.

The Australian Dried Fruits Association attempted to restrict the industry’s output voluntarily so all producers could share in the more profitable Australian and New Zealand markets. This failed,  but the Association persuaded the Commonwealth and four State governments to set up boards to regulate domestic and overseas sales. To keep the home price artificially high,  quotas were allocated to each grower for domestic sales. The rest was to be exported.

Some growers, including Frederick James of Berri, challenged the legislation and went to extraordinary lengths to circumvent it. James was not a member of the Australian Dried Fruits Association but marketed dried fruits under his own brand of ‘Trevarno’. He outwitted state government inspectors by using other producers’ packing-sheds and ‘border-hopping’ by land and sea. He also took his case as high as the Privy Council in Britain in 1932, claiming that the quota laws contravened the Australian Constitution. He won, in a decision that nullified legislation governing the marketing of a wide range of primary products.

Today 98 percent of Australia’s dried vine fruit is produced in the Mildura Region of Victoria and New South Wales. Its success is attributable to the dry climate, soil type and irrigation systems in the region. Dried tree fruits, including prunes, are produced  along the lower Murray and down through the Barossa. Domestically, the industry is facing competition from cheaper imports and the export market has all but…well…dried up.