The first Boema espresso machine was made by two Italian immigrants, Signori Bordignon and Emer, hence Bo-ema. Their company became an agent for the Italian manufacturer, Gaggia in 1956 but by 1959 they had begun to manufacture their own lever espresso machine.Although an early working machine was patented by Angelo Moriondo of Turin, the invention of the espresso machine has generally been attributed to Luigi Bezzera of Milan. The machines were first commercially produced from 1905 by the La Pavoni company in Milan after Desiderio Pavoni bought Bezzera’s patent. These machines, however, worked by driving steam through the coffee. The lever-driven machine familiar today was invented in 1948 by Achille Gaggia. It worked by propelling hot, pressurized water through a firm bed of finely ground espresso coffee. This produced a better tasting coffee than the steam method. 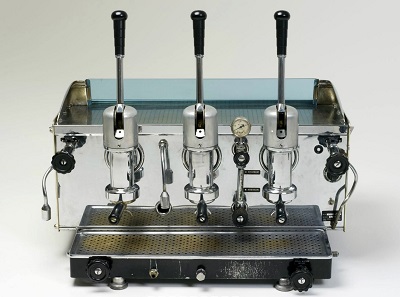 In Melbourne, Peter Bancroft and his father Harry brought the first Gaggia machines to Australia after visiting London in 1953.  They set up a café in St Kilda and imported further machines for local businesses including Università Cafe, in Lygon Street, Pellegrini in Bourke Street and Don Camillo in Victoria Street. Bancrofts then began manufacturing Gaggia machines under licence.

Rather than seek a licence to manufacture an overseas brand, Borgignon and Emer decided to make their own. They made the machines in the Emer Co terrazzo polishing machine factory in Alexandria, Sydney. The early models echoed the rounded, chromed style of the Italian espresso machine, but later became more functional and user-friendly in their design.

According to Sydney’s Powerhouse Museum, who have a Boema (or, as they call it, a Bo-Ema) in their collection, they were soon installed in Sydney cafes including the American Coffee Lounge at Wynyard. The museum also reports that a Boema was used at the Pasha nightclub restaurant in Cooma during the construction of the Snowy Mountains Hydro-electric Scheme, when thousands of European workers transformed the culture of the region.

Over time, Boema modified the design to suit Australian tastes, raising the “group heads” so the machine could accommodate a mug (the group head is the part of the machine that showers pressurized hot water over the freshly ground and tamped coffee). Boema are still making machines in Australia. The company is now owned by the Gibbs family who took over the business in 1992.

Note: Even “from the horse’s mouth” accounts vary when it comes to putting precise dates to espresso machine history. Peter Bancroft told The Age he first imported Gaggia machines after an overseas trip in 1953, and only later began to manufacture them under licence.  However, Flavio Vedelago, who worked for Bancroft, was quoted in an earlier article as saying Bancrofts began to manufacture the machines in 1951.  The Powerhouse Museum claims Boema began manufacture in 1956, whereas I’m reliably informed by someone in the the trade that 1959 was the actual date.