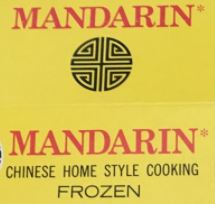 Although there had previously been frozen TV dinner ranges which included Asian dishes, the first all-Chinese frozen meal range may have been the Mandarin brand, developed by Gordon Fong in Tingha, a small town near Inverell in New South Wales.  The following text comes from Facebook posts by Juanita Kwok, who contacted me with these stories and gave me permission to use these photographs. She describes Gordon Fong’s business, in addition to her father Martin Kwok’s role in developing a range of frozen Chinese meals for White Wings in the 1980s.

She writes: There’s been some discussion in FB groups about the earliest Chinese cookbooks in Australia. On that vein, my father Martin Kwok was a pioneer of Chinese frozen meals, developing the “Hungry Dragon” line of Chinese frozen dinners for White Wings in 1981. I thought Dad was THE pioneer until I met Gordon Fong, my grandfather’s cousin, who started up a factory in Tingha producing “Mandarin” frozen Chines meals back in 1967. Dad and Gordon met once in Tingha in about 1961 when Dad had just migrated from Hong Kong. They met once again around 1974, when Gordon took his wife-to-be, Doreen, to Dad’s restaurant, the Nightingale on New South Head Rd, Edgecliff.

In 1967 Gordon Fong, who managed the Sam Kee store on Ruby Street Tingha, decided he would start a sideline business making and selling frozen Chinese meals, He rented a now demolished bakery building in Tingha, designed recipes and set up a factory employing four people. The name of the business was “Mandarin”. The frozen meals included Chop Suey, Carried Prawns and Rice, Chow Mein, Chicken and Almonds and Sweet and Sour Pork. 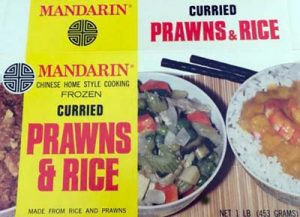 The business was a success with wholesale orders coming from Sydney, Brisbane and Melbourne. The greatest expense was transport as the meals prepared in the Tingha factory had to be transported out of Tingha on the New England Highway.

The business ran until 1975 when Gordon and his wife Doreen sold up and moved to Sydney. Gordon later started up another frozen food business called “Rice King” based in Wetherill Park. It is no longer owned by Gordon but it is still operating. Gordon and Doreen are living in Sydney and still going strong.

(Juanita writes)I first posted this on the Inverell, Bundarra, Tingha and Gilgai family history group page. It brought out some great comments from locals who remember working at the factory making the meals, peeling hundreds of onions and mixing up the ingredients in the big old bakery mixing bowls etc. The Fongs are fondly remembered in Tingha.

In 1981 my restaurateur father Martin Kwok worked with White Wings to develop a range of frozen authentic Chinese meals, marketed under the name “Hungry Dragon”. This was before people had microwave ovens in their kitchens. Dad devised recipes for Chicken and Baby Corn, Sate Beef, Beef in Black Bean Sauce and Sweet and Sour Chicken. He designed packaging with compartments so the meal could be stir-fried first, then vegetables added and finally the sauce, to ensure the ingredients retained their texture. On the side of the box there were instructions on how to boil the rice properly and how to make fried rice. It was a quality product. 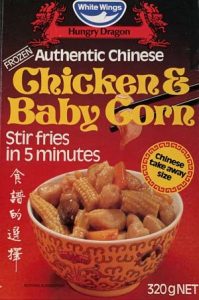 A White Wings executive no doubt approached Dad after dining at his restaurant, the Nightingale, at 62-64 New South Head Rd, Edgecliff. Dad owned a number of restaurants beginning with the Golden Sampan, which opened in Carlingford about 1970.

The one which truly manifested Dad’s grand ambitions was the Nightingale which opened in 1974. Dad commissioned a Japanese architect to design a modern multi-level restaurant with no expenses spared on decor or tableware. Out of the kitchen came soups served in exquisitely carved winter melons, hors d’oeuvre platters of cold meats and jellyfish arranged in the shape of a phoenix (or nightingale) and dishes with exotic ingredients like beche-de-mer.

Our grandfather, Richard Kwok, sat downstairs doing the accounts on his abacus. Upstairs was the party room with the mahjong tables. Dad was the host, invariably described as charming in the restaurant reviews. Dad also caught the eye of a TV executive who filmed Dad in a pilot Chinese cooking show called “Martin Kwok and his Magic Wok”. The show never got off the ground, which is a pity as I think it would have been a first.