Australia’s first TV chef was Willi Koeppen. His program, The Chef Presents was one of Australia’s earliest TV cooking programs. It aired on Melbourne’s HSV-7 from 1957 to 1959. The five-minute segment was later expanded to 15 minutes and broadcast in various time slots. Koeppen went on to open The Cuckoo restaurant in the Dandenong Ranges.

Willi Koeppen was born in Berlin in 1929 and arrived in Australia in 1956. He gained a position as Executive Chef at Melbourne’s Chevron Hotel- at the time a five-star establishment. His first foray into the media world was with radio station 3XY, where he hosted a popular German show. Then, in 1957, he became Australia’s first TV chef with The Chef Presents. 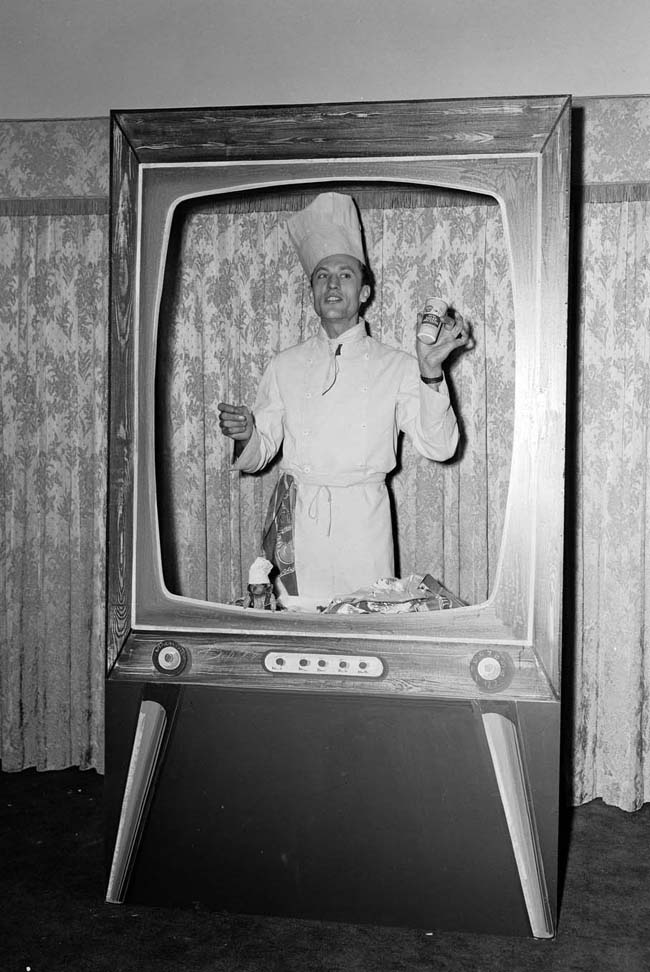 It appears he was also retained to promote Heinz products. A rather bizarre image shows him standing in a booth decorated to resemble a television set, holding a jar of Heinz Salad Dressing.

Willi met his wife, Karin, at an Olympics party and together they bought the Quamby café in the Dandenong Ranges outside Melbourne. They lived in the basement while they turned the old café  into The Cuckoo, Australia’s first smorgasbord restaurant. Soon after, Willi’s television career came to an end. The restaurant, however, flourished.

Then, in 1976, Willi disappeared. By then he was 46 and the father of three. He closed the restaurant one night, visited a nearby friend, then vanished. His Volkswagen Kombi van was found the next day parked at the restaurant in its usual spot with the keys in the ignition and the doors wide open. Although no clue has been found to help solve the mystery, he was almost certainly murdered. Suspicion has fallen on an underworld figure who, years later, was himself murdered in gaol.

Despite renewed police enquiries in 2012, it seems likely that the disappearance of Willi Koeppen, Australia’s first TV chef, is a puzzle that will never be solved.