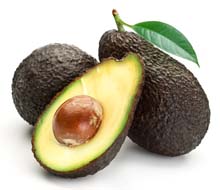 In an article in The Telegraph, Brisbane, in 1929, Margaret Cullen wrote about Robert Walsh’s Redcliffe garden where avocados were among the tropical and sub -tropical fruits being grown. She described the fruit, explained its history (omitting to say that the Aztec word for avocado, ahuacatl, also means “testicle”), and wrote that: ‘They are superb served as a salad (with or without other raw ingredients), with a mayonnaise dressing. Spread on toast or water biscuits and lightly peppered and salted they make a delicious “savoury.”’ Her article is likely the earliest mention of avocado on toast.

Cullen called the avocado (then known as the avocado pear) a “pear with a past”.  She had reason. The fruit is known to have been cultivated as long as 7500 years ago in central America. It came to the attention of the Spanish conquistadors. In 1525,  Fernandez de Oviedo described it in his writings on the Americas: “In the center of the fruit is a seed like a peeled chestnut, and between this and the rind is the part which is eaten, which is abundant, and a paste similar to butter and of very good taste.”

Avocados were first mentioned in English in 1672 by a physician who had visited Jamaica. English sailors are known to have spread smashed avocado on hard tack biscuits, earning it the name of “midshipman’s butter” – a forerunner of our avocado on toast. The fruit also became known as alligator pear, perhaps because of the bumpy green skin. “Alligator pears” were grown as early as 1833 in Forida, USA, but the commercial industry really didn’t get underway until the early 20th century.

In Australia, acclimatisation societies had experimented with avocados since the mid-19th century. In 1864, a Mr. Lacy H. Rumsey of the Ipswich Parsonage sent a letter to the Queensland Acclimatisation society advising them that his plant, imported from Jamaica, had been growing for seven years.  Around the same time, trees in the Sydney Botanic Gardens were producing fruit.

According to the Humpybong* Weekly and Advertiser, Robert Walsh had obtained his avocado trees from Professor Wilson Popenoe of Berkeley University, San Francisco, who had recently returned from an 18-month tour of Mexico, Guatamala and South America.  Walsh obtained 15 varieties, perhaps including the Haas and Fuente varieties that were developed in California and are the most common varieties of avocado we eat today.

The avocado industry in Australia was slow to develop.  In 1920, there was interest in growing avocados in the Sunraysia district. The Observer reported that it “had been introduced to Queensland, and the South Australian Government Horticultural Expert (Mr. George Quinn) was anxious to test it at Berri, on the River Murray, where there was every probability it would succeed. It was doubtful, however, whether it ever would become popular.”

In the short term, this prediction proved correct. Although named varieties imported from California were imported in 1928 and attempts were made to promote the fruit, it remained a curiosity through the 1930s and ’40s. Although it was associated with Hollywood glamour – mention was made of a film star’s avocado and grapefuit salad – newspaper reports insisted there was “good reason to doubt it will take with the average buyer”.

The occasional recipe appeared. In 1938 The Argus printed one for a jellied avocado salad while by the early 1940s variations on the theme of avocado, shrimp and grapefruit with French dressing began to pop up. In 1945, the Cairns Post even had a recipe for guacamole.

The next reference to avocado on toast came in 1946, where the mashed flesh was mixed with tomato ketchup, spread on toast, covered with bacon and grilled.  In 1950 came another scary jellied version: Jellied Chicken Avocado.  At this point, though, despite the production of a “small, beautifully coloured leaflet” promoting avocados, many of the few who tried them didn’t like them.

It wasn’t until the late 1960s and early 1970s that the avocado became more familiar to Australians. Its rise to fame coincided with the liberalisation of liquor laws that prompted the proliferation of restaurants. Avocado Vinaigrette or Avocado Seafood became standard entrées alongside the ubiquitous seafood cocktail. For a couple of decades, it retained its status as a delicacy, but once we got the taste for avos there was no stopping us.

The credit for introducing avocado as a breakfast dish probably goes to Bill Granger of the eponymous bill’s,  who put it on the morning menu in his Sydney restaurant in 1993. He was the first of many, and avocado with feta, or goat’s cheese, or tomatoes, or a poached egg, or bacon, or all of the above became a standard café breakfast dish. Then, in 2017, demographer Bernard Salt caused a furore by blaming a liking for a pricey smashed avocado on toast at a café for the millennial generation’s failure to accumulate a house deposit.

The hoo-ha has died down. We can all by avos for a couple of dollars each at the supermarket, make our own dark rye sourdough toast and enjoy what has become one of our national dishes.  The “pear with a past” is guaranteed to remain a significant part of our culinary future.

*Humpybong, by the way, is about 28km north of Brisbane and was the site of the first colonial settlement in Queensland. The convict camp was soon abandoned, after which, apparently, “the humpies were allowed to go ‘bong'”.