Famous for frog cakes,  square pies and custard tarts, as well as the cafés they ran in Adelaide for many years,  Balfours is a household name in South Australia. The company can trace its history back to 1853, when Scottish emigrant James Calder and his wife Margaret (née Balfour) opened their first bakery and shop in Adelaide’s Rundle Street. Balfours  is now owned by San Remo – another South Australian company.

James Calder had owned bakeries in his home town of Edinburgh before emigrating to Australia. The Calders were evidently bound for Melbourne, but decided to end their voyage in the newly-established town of Adelaide. Their business was evidently successful, requiring the erection of a new ‘steam biscuit factory’ in 1867. Ten years later, Calder established a partnership with his wife’s nephew, John Balfour, who continued to manage the business as Calder and Balfour after Calder’s death.

The depression of the 1890s weighed heavily on the business, which was bankrupted and most of the assets sold to James Calder’s nephew, Andrew Calder, who later sold to another bakery business. The Balfour name continued through a series of cafés opened through the efforts of John Balfour’s wife, Elizabeth.

Over the years, through various mergers and family connections, the company became known as E. Balfour & Co., Balfour, Bricknell & Co., Balfours Ltd and finally Balfour Wauchope Ltd. The first Wauchope (pronounced war-cop) to join the business was Elizabeth Balfour’s son-in-law, Charles. Manufacture was continued at a new factory built in 1914 in Morphett Street, Adelaide and management of the firm was passed through the generations of the Balfour and Wauchope families. 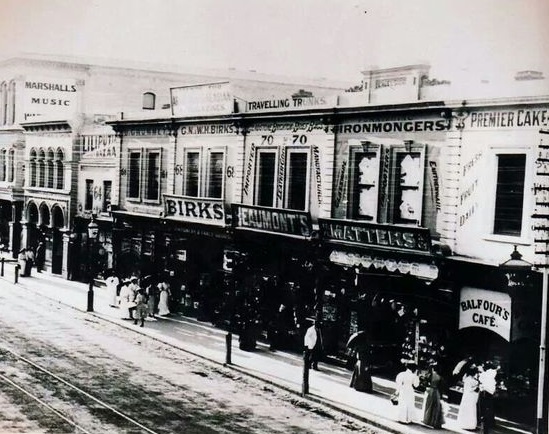 The Balfours cafés were a preferred meeting place for many of Adelaide’s smart set and for the business community. They hosted many a lecture, 21st birthday party and club meeting. After WWI, one of the cafés in King William Street was the birthplace of the Legacy movement in South Australia.

Balfours continued to expand and in the 1990s established interstate offices in Melbourne and Sydney. There was even a focus on export, in particular to Japan. Sadly, it appears that the company over-reached and lost the backing of its bankers. In 1996 it was placed in receivership. While continuing production, the company entered an era of financial instablity and passed through several changes of ownership before being acquired by San Remo.

San Remo is itself a privately owned, 100% Australian company, founded by Luigi Crotti in 1936. It is based in Windsor Gardens, Adelaide.