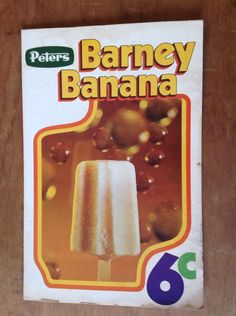 Peters Barney Banana, a banana ice cream on a stick, was launched in 1958.  It was promoted as containing real bananas. The product was discontinued by Nestlé Peters in 2003, owing to slow sales. A social media campaign by disgruntled fans resulted in the reinstatement of the product in 2009, marketed through supermarkets in multi-packs under the Billabong sub-brand.

It seems the revived ice cream lacked the real banana bits that had characterised the original version, but at least fans had their Barney Banana fix and it was still “made with real banana”. However, its return was short-lived and the product was discontinued again in 2012. Again, social media called for its return.

Then, in January 2017, Peters Ice Cream (now owned by the European company R&R Ice Cream) announced on Facebook: “He’s back“, saying that Barney Banana was available exclusively at Coles Express for $2. In December 2017, it popped up in IGA stores and is now available in most supermarkets. You have to be a fan to buy it  though – the ice creams come in a pack of eight.

The claim to be made with real fruit seems to have gone, however. Although product descriptions still say “no artificial colours or flavours” the ingredients list lacks one notable component: banana.