Barossa Pearl, however scornfully it’s referred to these days, changed the Australian wine industry. It was based on a German style known as Perlwein and brought to the market by Colin Gramp of Orlando, who believed it would appeal to young people. It did. While the rest of the industry watched with some skepticism, Barossa Pearl became a huge success. Competitors eventually followed with more sparkling, sweetish wines: Sparkling Rinegolde, Starwine, Gala Spumante and Porphyry Pearl. 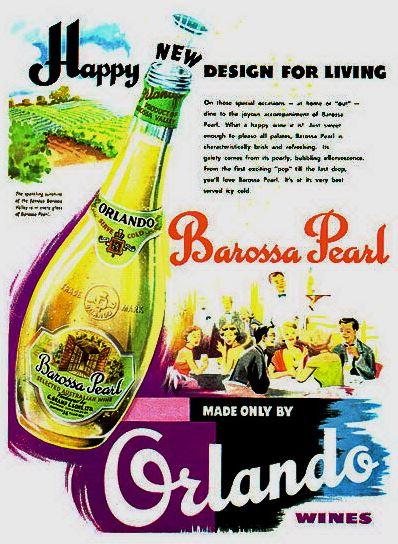 The intention was to launch Barossa Pearl in time for the Melbourne Olympic Games. The actual launch day was 5 November 1956. The wine was a light, delicate, fruity sparkling wine with a clean, lingering finish. Colin Gramp liked the look of the Perrier sparkling water bottle, so the Barossa Pearl bottle was a similar design but with a longer neck.

The wine also had a lower alcohol content than traditional sparkling wines. This was achieved by adding Muscatel and Frontignan juice rather than sugar to promote the secondary fermentation – the process that produces the bubbles. It also gave the wine extra fruitiness.

The success of Barossa Pearl led other wine companies to release their own sparkling party wines. Many of these were made for them by Kaiser Stuhl. Previously known as the South Australian Grape Growers Coop, Kaiser Stuhl was rescued from near bankruptcy by Ian Hickinbotham. He saw the potential to make wine for other labels.

The Barossa online magazine, Glug, tells the story like this:

Hickinbotham turned to Leo Buring, a venerable and trusted name who sold a pleasant light wine called Rinegolde, which dated back to the 1930s, and contracted to produce for them a sparkling version. This debuted for Xmas 1959 and was a huge success. It is generally accepted that this one move saved the Coop and it now expanded and diversified. By 1968 the last year of the contract it was 30% of the Coop’s production.

Having mastered the art of making sweet sparkling wines, contract work boomed and they produced Pearlette for Yalumba; a Cheo Frizzante from 1960 to 1962; an Asti Spumante for Stock Distillerie in 1962 which later became Gala Spumante; Mardi Gras and Tiffany for Penfolds; Viva for Wynns; and Sparkling Est for Woodleys. Technical winemaking help was needed and they sponsored Wolf Blass to Australia on a three year contract. He arrived in 1961 and bought to the market the Cheri and Pineapple Pearls which were released in 1962.

In 1963 Kaiser Stuhl Pearl with its waist shaped bottle, known as the Mae West was released. With the loss of the Rinegolde contract in 1968 they launched the same product as April Gold. After Lindemans released a Cold Duck they replied with their own in 1970 and shortly after 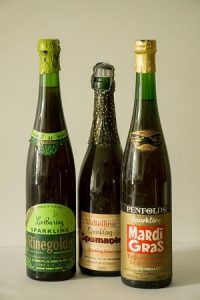 followed with a White Duck. Spritzers and Sangria came out in 1972 and later a sparkling grape juice was released.

Wow, many blasts from the past there – mostly long gone. The Cheri and Pineapple Pearls were surely a particular low point.

As it happens, we found some old bottles recently in the garage of an elderly relative. We tentatively dated these around 1974-5. The Sparkling Rinegolde bottle cites an award won in Brisbane in 1974, but the label still shows the contents as 1 Pint 6 fl.oz. Since decimalisation in the liquor industry was theoretically complete by the end of 1974 that leaves a pretty narrow window. Who knows what these gems will taste like?  And will we ever be game to find out?

Update:  as expected, they were undrinkable.