Bennett’s Cordials – made in Tigerland 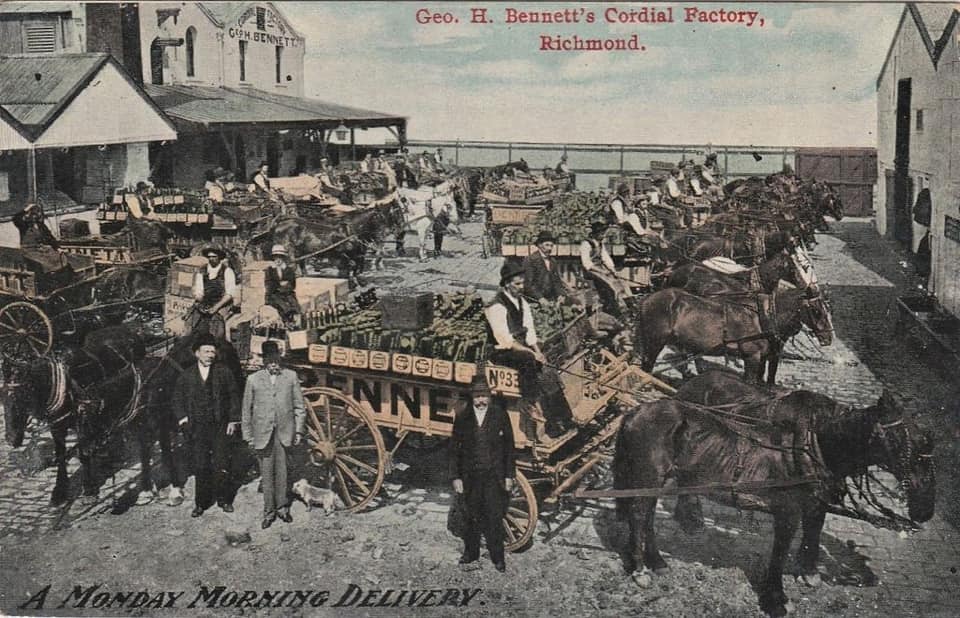 Since we moved to Richmond (well, across the road from Richmond – our side of Victoria Street is officially Abbotsford) we’ve been impressed by the tiger murals and the local fervour that accompanies the AFL grand final. The Tigers (aka Richmond) have a strong following here. Which, for me, added an extra twist to the story of Bennett’s Cordials. The eponymous Mr Bennett was, at one time President of the Richmond Football Club.

George Henry Bennett was born in Scotland in 1850 and arrived in Australia as a five-year-old. He grew up in Melbourne’s inner suburb of Collingwood and, after jobs in the carrying business and the sugar industry, became a partner in the Excelsior Brewery. He and his business partner, Timothy Lane, abandoned brewing for the cordial industry and from 1883 he became the sole proprietor of Bennett’s Cordials.

Bennett held many public offices. He was a councillor and, later, Mayor, of Richmond. In 1889 he was elected to the Victorian Legislative Assembly and continued as a member of the Victorian parliament until his death in 1908. In 1887 Bennett became the second president of the Richmond Football Club, another position he held for the rest of his life. During his presidency, the Tigers won a couple of premierships in the Victorian Football Association and were promoted to the main game: the Victorian Football League.

As a politician, Bennett was sympathetic to the union movement, even though he was a business proprietor. He supported the eight-hour day and believed in the possibility of conciliation between employers and workers. He wasn’t keen on giving women the vote, but was forced to end his opposition by the views of his electorate. In 1905, Bennett was instrumental in pushing through regulations to ensure water used in the manufacture of soft drinks and cordials was filtered in the interests of purity.

Bennett’s Cordials seems to have had works in both Bridge Road and Church Street, Richmond. At one point, his establishment included stabling for 52 horses. According to Picture Victoria, the photograph titled “Monday Morning Delivery” depicts the factory at 263 Church Street. However, numerous newspaper articles make reference to the Bridge Road premises. 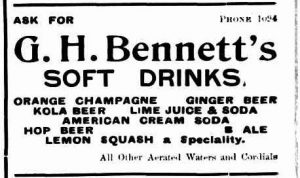 It’s not clear which products were in the range in the factory’s early years although they almost certainly made ginger beer. Advertisements from the early 1900s promote lemon squash and Kola Beer, “the best drink for summer”. In 1909, the firm was advertising the mysterious “Ixie and Orange Champagnes”. The range no doubt included many other flavours, some of which were included in a 1915 advertisement.

After Bennett’s death the business continued under the management of one Mr Wallis. The company even had its own football team, with one match against rival soft drink maker Marchants recorded in the local paper. However, it seems the business was either wound up or bought out in 1916. In 1918 the site was acquired by Griffiths Teas.

A bust of George Bennett now stands outside the Richmond Town Hall in Bridge Road.  One of the streets leading off Victoria Street, just a little way down from our apartment building, is named Bennett Street.