Betty King, Home Economist, of World Brands Pty Ltd was one of the leading ladies of Australian cookery…the Margaret Fulton of her day. Unfortunately, she’s didn’t exist. Betty King, ‘leading home economist’, first appeared in Australian women’s magazines in 1950 promoting Mello Chocolate Dessert. She went on to spruik a range of brands, supported by her ‘staff of experts’ and her ‘professional kitchen’. Betty King was  a fictional character – a figment of some marketing executive’s imagination – no doubt inspired by the equally fictional Betty Crocker in America. 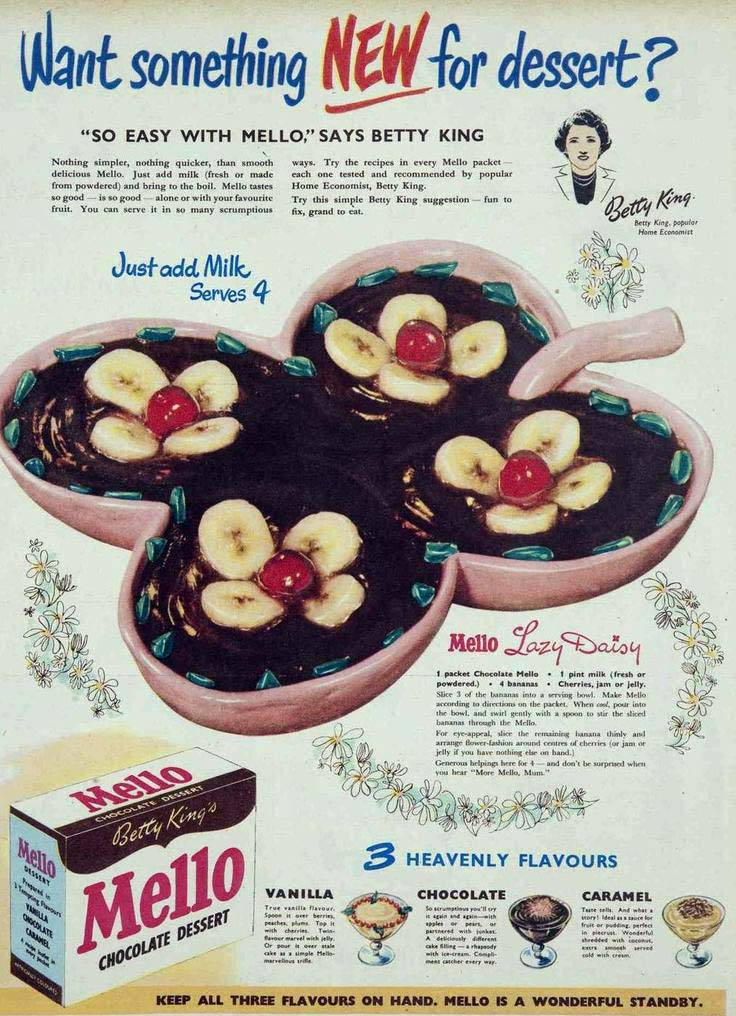 The character’s first task was to personalise  the new chocolate pudding-in-a-packet by providing recipes on each pack and hints on serving and decorating each of the three flavours.

But her creators at World Brands hired her out to other manufacturers as well.  Betty also introduced Australians to a new Melt’n’Mix method of cake making using Copha, a coconut fat made only in Australia and one of the principal ingredients of Chocolate Crackles. She also gave her ‘expert’ endorsement to…among other products… Continental packet soups, Lipton’s tea, Puffin Multi-Mix baking mix and Deb Instant Mashed Potatoes.

Later she became the voice of Birds Eye frozen vegetables. A 1957 advertisement  claimed “They’re so easy to cook, too! With no waste and no preparation needed…These are the fabulous foods you’ve read about in those glossy magazines from overseas. These are the most exquisitely flavoured fruits and vegetables obtainable.” (Michael Symons: One Continuous Picnic)

Betty King also advertised her ‘staff of experts’ and her ‘professional kitchen’ where she developed new recipes, simplified time wasting techniques, and accumulated knowledge that would benefit the housewife and her family. She even had a column in the Australian Women’s Weekly and invited women to connect with her by writing in for recipes for special occasions and for information and hints or if something went wrong.

And it seems people believed in her. Proof of her credibility was offered to her readers by referring to the ‘constant stream of letters that pour in from every city and country district’. You couldn’t do it today –  inventing a totally fictional expert and pretending that she would personally answer your questions might just run afoul of Trade Practices legislation.

Betty’s appearance evolved over the course of the decade but, not surprisingly, she  disappeared in the early ‘60s… as have some of the brands she promoted and the company she represented.

But she was a product of the times. Her role was to help women create quick interesting, easy, tasty meals for their families and to support their creative endeavours and their busy lives. In the 1960 Housewife’s Day survey, it was found that women in Melbourne spent an average of 4.5 hours each day around food preparation. No wonder the quick and easy methods Betty promoted were…at least at the time…so successful. 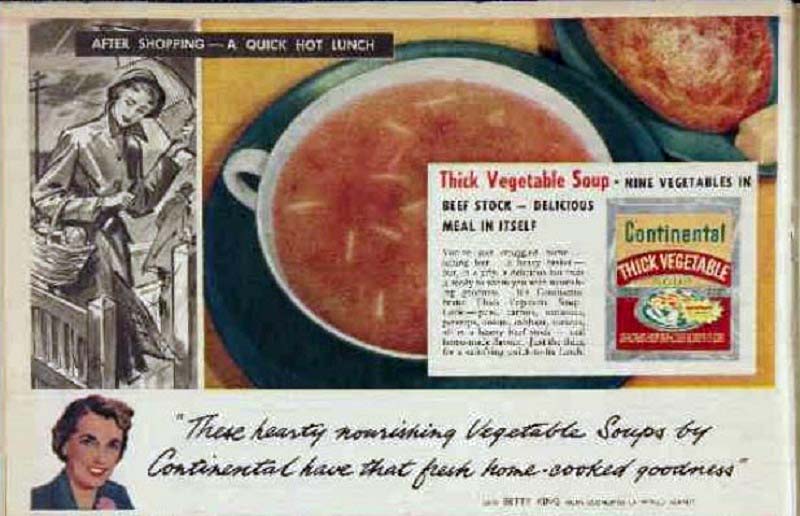