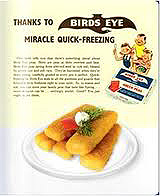 Birds Eye Fish Fingers, produced by the quick freezing process developed by the eponymous Clarence Birdseye, were introduced in 1956 and touted as an ideal way to encourage Australian children to eat more fish. Evidently it worked. According to the manufacturer, the number of Birds Eye Fish Fingers now sold in Australia each year would cover an area twice the size of Tasmania. As if that statistic isn’t mind-boggling enough, they also claim that laid end to end, these fish fingers would be twice the length of the Great Wall of China.

Clarence Birdseye was an engineer who became interested in frozen foods while working in Labrador. He found that food frozen quickly at extremely low temperatures maintained its texture and went on to develop “flash freezing” technology. His products first went on sale in the USA in 1930 and included  meat,  fish, fruits and vegetables. For a history of frozen food in the USA from Clarence Birdseye to today, see The Strange History of Frozen Food.

It seems home-made fish fingers pre-dated the frozen variety. A recipe from the Tamworth Herald (England) in 1900 reads as follows:

A very useful breakfast dish can be prepared as follows: Flake and mince any cold cooked fish very finely, and mix it with two-thirds its bulk of cold cooked rice; season to taste with pepper, salt, and minced parsley, mixing it into cakes with the white of an egg; shape these neatly, brush with beaten egg, cover with breadcrumbs, and fry in plenty of hot fat to a delicate golden brown; drain well, and serve.

Frozen, ready-to cook “fish sticks” were produced in the USA in 1953. However, the first fish fingers, as we know them, were developed in a Birds Eye factory in Great Yarmouth, England, by Mr H A J Scott.  Versions using cod and herring were originally trialled, with the cod version being preferred. Birds Eye launched their fish fingers in Britain in 1955 and they have become a household staple.

It took just a year for Australia to follow the British lead. And their popularity continued.  We even tried to tart them up, with recipes for Fish Fingers Kirkpatrick or a chowder with tomato puree and white wine. Writing in The Age in 1981, Dennis Pryor claimed surveys showed that they were particularly popular among Roman Catholics  who “served fish fingers on Fridays on 32 per cent of occasions”. They are now generally thought of as kid fodder.

Birds Eye Fish Fingers in Australia are now made from Alaskan Pollock or New Zealand Hoki.