The first documented appearance of Australia’s most popular coffee order was at Moors Espresso Bar in Sydney’s Chinatown in 1985. The proprietor, Alan Preston, hailed from North Queensland, where Italian café owners had long been offering white coffee in three variations – cappuccino, flat or Vienna. Preston coined the abbreviation “Flat White” when he opened Moors, his first café in Sydney.

On his website Alan Preston tells the story of the Italian sugar boom millionaires who made their fortunes in the North Queensland cane fields. They brought their culture with them, including the need for a good cup of coffee. The Italian-run main street cafés were early adopters of the espresso machine. Preston claims that by the early 1970s, North Queensland’s count of machines was only exceeded by Italy and Spain. 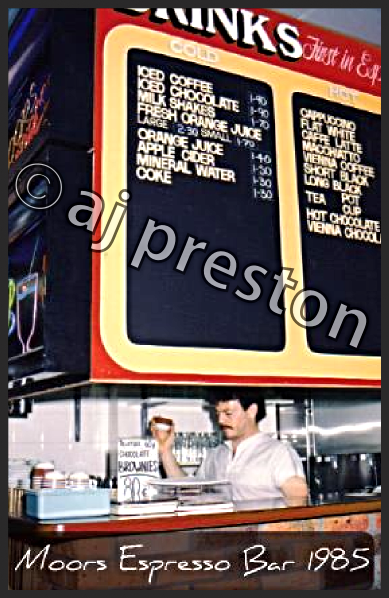 The coffee served in these establishments came, he says, in five varieties. Black coffee – short or long. White coffee – cappuccino, flat or Vienna. When Preston opened the first of his seven Sydney cafés, his menu was a little more extensive. As well as the North Queensland classics, he included a Caffe Latte and Macchiato. And he changed the name of the classic white coffee.  “It seemed natural to me to do what had already been done with Long Black and Short Black so I abbreviated White Coffee – flat, to Flat White when I did Moors’ menu in 1985,” Preston says.

Moors became a favoured haunt of labour party stalwarts. Chief among these was Anthony Albanese who, Preston says, arrived on opening day at Moors and lunched there five days a week for the next five years. Preston went on to open the Café Prestoni and five subsequent Sydney cafés. The word obviously spread, and by the end of the 1980s the flat white was showing up on menus all over town.

“I am and was, the original Flat White enthusiast and to this day it is the only way I drink Espresso. I have very strong ideas about what, exactly a Flat White is and how it should be consumed,” Preston says. “I would give Flat White lessons at the counter and my devotees would bring back their cups for inspection of the correct sip mark rings down the cup. Made correctly, the beverage will fall off the side of the cup and the tide marks will endure to the last sip.

“Also, the trick with a Flat White is to coax the oil onto the top as much as possible during the milk pouring. Always leave a Flat White to stand for several minutes before drinking carefully. This allows the top (the meniscus) to thicken and adds texture to each sip.  NO SPOONS OR SUGAR TOLERATED. My memories are of obedient customers leaving their Flat Whites to stand and then drinking them to my exacting instructions.”