The Australian Women’s Weekly Children’s Birthday Cake Book has become the bible for achievement-oriented mums who want to make that birthday party special. First published in 1980, it has gone through many subsequent editions. By 2011 it had sold more than a million copies and the decision was made to print a Vintage Edition. The book was written by Pamela Clark and  Maryanne Blacker.

In 2018 Pamela Clark, the woman behind the Birthday Cake Book, told the ABC about how the book was developed. She clearly had her personal favourites among the fantasy cakes, but is scathing about one particular construction. The Tip Truck Cake was developed at the request of her editor. It was a nightmare to make but, as the editor’s pick, warranted a double page spread in the book. “Don’t go there,” Pamela warns. “Glue the pages together.”

Popular designs from the Children’s Birthday Cake Book include the Swimming Pool Cake, the Choo Choo Train and the Fairy Castle. It’s all in the decoration – the recipes themselves specify butter cake mix as the basis for most of the cakes. In the Vintage Edition, four of the original designs were replaced with new designs. It seems that these depicted cartoon characters and the publisher was unwilling to renew the licence for their use.

The book is a pop-culture classic and has inspired articles, performances and cooking events. The classification of many designs as “for boys” or “for girls” makes the book somewhat politically incorrect, but so far the anti-discrimination crowd have failed to demonstrate against it. 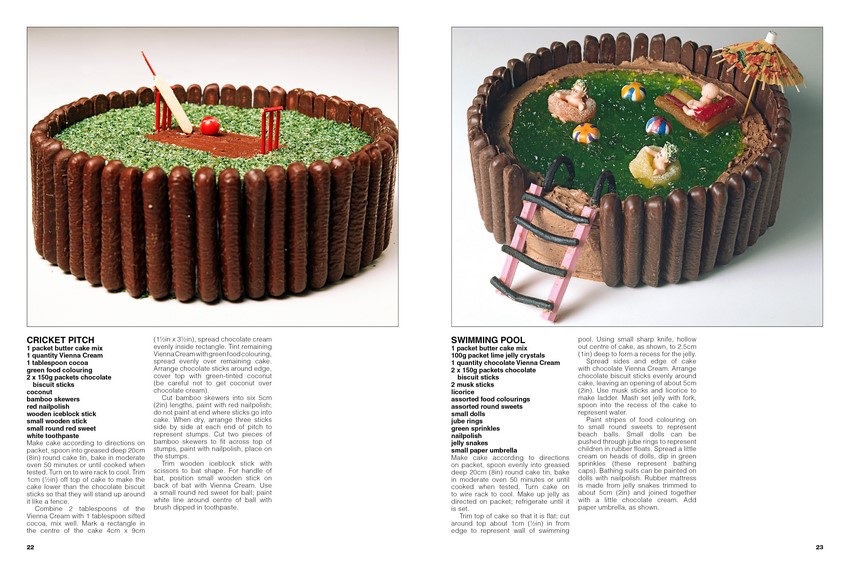