The Breville Kitchen Wizz food processor was an affordable Australian version of the European MagiMix. It was one of the time-saving appliances designed to make life easier for working women, who wanted to impress at dinner parties but no longer wanted to make pastry by hand, or spend tedious hours grating vegetables or pushing ingredients through sieves.

The Kitchen Wizz was launched in November 1977 in the lead-up to Christmas, as part of a 48-page Breville feature in the Australian Women’s Weekly. It was promoted as “the most revolutionary kitchen machine ever.” With just four attachments (two blades and two discs) it could perform a whole range of culinary functions. 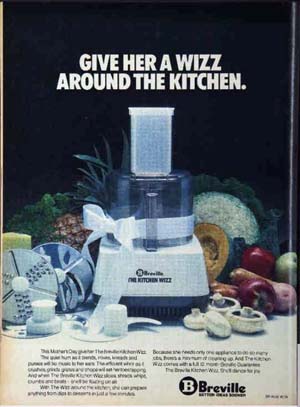 The following year, its advertising for Mother’s Day was just a little patronising. After all, what could bring more joy to the lady of the house than a new kitchen appliance?

From 1977 through 1981, The Weekly ran a competition to find the “Best Cook in Australia”.  To enter, contestants had to submit a three course dinner party menu, with recipes. The state finalists then participated in a live cook-off. Breville was involved as a sponsor for the competitions, with naming rights in 1978. That year the best cook was Patricia Rodrigue. The meal she cooked was yabby-stuffed zucchini, East meets West ducklings and zabaglione.