Adolph Brockhoff established his flour mill and bakery in North Melbourne in 1882. His son Frederick took over the company in the 1890s, renaming it Brockhoff’s Biscuits Pty Ltd. Brockhoff’s were makers of popular favourites including Chocolate Royals, Chocolate Ripple, Salada and Shapes. The company amalgamated with Arnotts in 1964 but the brand persisted into the 1970s.

While many of Australia’s early biscuit makers had a Scottish background, Adolph Brockhoff was German born. He had served in the Union army during the American Civil War before migrating to Australia and starting a general store in Port Fairy, Victoria. Brockhoff’s Biscuit Company was to remain in family hands until the 1960s. Frederick Brockhoff led the family firm until the 1930s, after which management passed to his sons Alan, Harold and Jack. The youngest son, Jack Brockhoff, became Managing Director and largely led the direction of the company for the next five decades.

The 1930s saw the introduction of several biscuit varieties that are still around today, including Savoy Crackers and Chocolate Ripple biscuits. There were many other 1930s favourites that have vanished along the way, including Currant Shorties, sugar-sprinkled Trellis biscuits, Crispettes and Nutrola.

In 1951 the Brockhoffs purchased a market garden site in the (then outer) Melbourne suburb of Burwood, where they built a modern factory, opened in 1953. It was to continue in operation until 2002 and residents of Burwood have fond memories of the enticing odours wafting from the Brockhoff’s Biscuits factory.

Brockhoff’s friendly baker character was a feature of their advertising from the early days. The sheet music for their popular jingle was published in the 1950s and promoted as “a cheery little song for young and old”. The lyrics ran: 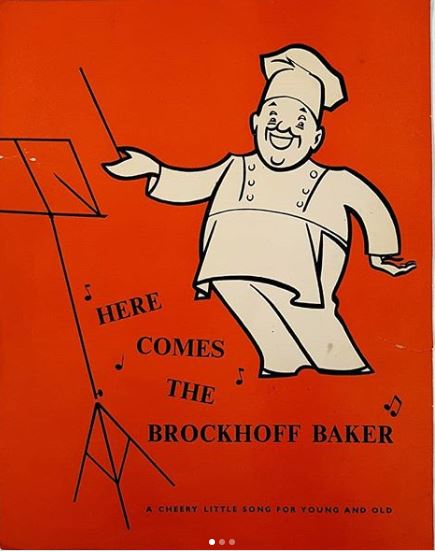 Jack Brockhoff led the company into a merger with Arnotts and Guests in 1964, forming the Australian Biscuit Co. Ltd and acquiring Swallow & Ariell. The purpose of the alliance was to thwart the ambitions of the American-owned Nabisco Pty Ltd to establish a significant presence in the Australian market. The individual brands were maintained for some years but after the company was floated as a public company in 1970 they were subsumed into the Arnotts brand.  Jack Brockhoff continued to manage the Melbourne operations until 1973 and remained a director of Arnotts until his death in 1984.