The bunya nut, from the Bunya Pine, was an important food source for aboriginal people of Queensland’s Darling Downs area. Every three years, many different tribes would travel to the region to feast on a bumper crop. The introduction of government settlements displaced indigenous people and these large gatherings ceased. The last large Bunya gathering is thought to have taken place in 1902.

The Bunya pine (Araucaria bidwillii) is indigenous to the Bunya Mountains and Blackall Range in the Darling Downs region of Southern Queensland. For thousands of years, it played an important role in aboriginal culture. 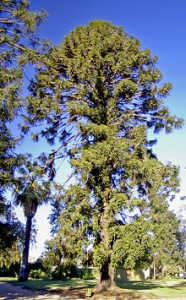 The mature trees grow to around 50m high and produce cones weighing up to 10kg. Each cone can yield up to 60 nuts, which are found by pulling the cones apart. The nuts then need to be extracted from their tough outer casing. The bunya nut can be eaten raw or roasted, or can be ground to product a kind of flour called nyangti.

Once every two or three years, the Bunya trees (called bonyi by the local people) produce a particularly prolific crop. During these seasons, aboriginal people from many other regions would travel to the mountains to enjoy the harvest. There are reports of people from as far away as South Australia and Western Australia travelling to these gatherings.

The whole of these people were on their way to the Bunya Bunya country, for the purpose of obtaining that very remarkable fruit, the product of the Araucaria Bidwellii. Perhaps I shall be better understood by representing it as a species of the Norfolk Pine, Araucaria excelsa. The present species is, however, much larger than the latter kind, with large, feather-like branches; altogether, perhaps a more magnificent tree it is difficult to conceive.

The fruit is as large as a common-sized cocoanut, and, when roasted, the taste is equal, if not superior, to a mealy potato. It is only produced in large quantities every third year, when the various tribes meet for many miles round to collect and eat it…. The Bunya bunya tree is confined to a narrow belt of elevated country on the coast range, averaging from twelve and a half miles wide by twenty-five in length, and in no other part of Australia has this plant been found. [2]

The gathering provided an opportunity for many aboriginal groups to meet for trade, to exchange stories and songs, to conduct ceremonies and to observe cultural, social and kinship obligations. Once Europeans settled in the area, such a large gathering of aborigines was seen as a threat. After many years of frontier violence, laws were passed in the late 1890s removing people from their traditional lands and relocating them on reserves. This disruption meant the end of the Bunya gatherings.