The restaurant that was to evolve into Café Florentino opened its doors in Melbourne’s Little Collins Street in 1893. The propietor was Swiss-born Calixte Denat.  The restaurant was relocated several times, before opening above Samuel Wynn’s wine store in Bourke Street in 1925. With its French cuisine and luxurious decor, Cafe Denat was, with Fasoli’s, one of the two leading restaurants in Melbourne in the early 20th century.

On 28 April 1893 The Herald announced that: “On Monday next an important addition will be made to the list of places which cater for the wants of Melbourne business people in the shape of the Cafe Denat, in Little Collins street, between Swanston and Elizabeth streets.”  The Herald may have been particularly interested because the restaurant was to be located in the paper’s former premises.

The article went on to describe the three-storey establishment, which included a banqueting hall on the top floor and twelve “cabinets particuliers,” or miniature supper rooms on the second floor. On the ground floor, the main dining room was to serve lunch consisting of oysters, soup and vegetables, with wine, “at a moderate cost of one shilling and sixpence”.

M. Denat’s experience included the role of chief cook for the French shipping line Messageries Maritime. In Melbourne he had been the caterer for the French Club and had run a previous restaurant called the Cafe Anglais. His mission was to educate the local barbarians in the art of eating. The Herald expounded on this aim:

It is a generally accepted fact that English speaking people as a rule do not know how to eat — that is to say they take in sustenance to fill a void much as a steamer takes in a supply of coals. The French nation are par excellence artistic diners or – breakfasters, —what you will. M Denat will not only provide customers with a Parisian menu, but he will instruct them in the art of taking their meals in comfort.

The Cafe Denat continued at its Little Collins Street address until 1904, when a move was made to Swanston Street. Many of the grand fittings and furnishings were sold off at an auction, so perhaps the new premises were more modest in their scope. Among the items offered were two pianos, massive mirrors, a cooking stove and spit and 60 pairs of curtains.

In 1908 the restaurant moved again, this time to Exhibition Street “almost opposite Her Majesty’s Theatre”. Advertising itself as Melbourne’s only French cafe, in 1913 Cafe Denat offered “Diner d’entente cordiale” for four shillings, with table wine included.

The wine got Denat into considerable difficulty, resulting in several court appearances. While the premises had a wine licence at the time Denat acquired it, the terms of the licence permitted only “colonial wines” to be sold. Denat reportedly surrendered the licence rather than be restricted in the wines he could serve to his patrons. The first case against Denat, in 1913, was thrown out when he said he was not selling wine, but giving it to diners. However, later prosecutions were successful.

In 1920 Denat, being in poor health, sold Cafe Denat to wine merchant Samuel Wynn who installed former waiter Gustav (George) Hildebrand as manager. In 1921 an unsuccessful attempt was made to procure a liquor licence. The application was opposed by the City Mission, the Salvation Army, the Women’s Christian Temperance Union and by “Sister Grace” who claimed that intoxicated cafe customers in evening dress had crossed the road to her mission and addressed her “in most uncomplimentary terms”. 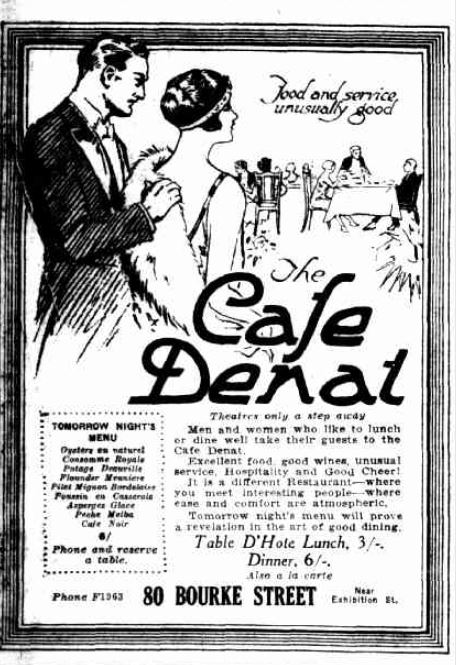 The licence was refused, but it didn’t stop Hildebrand from selling alcohol. There were more convictions and fines in following years. Perhaps it was the liquor issue that prompted Samuel Wynn to move the Cafe Denat into his already-licensed wine shop premises in 1925.  Early advertising for the new venue promised “wine with meals until 8pm”.

Despite the change of ownership and location, the menu remained French. Typical dishes to be offered included Huitres en Cocktail, Potage Savoia, Canard Roti aux Pommes and Asperges Tourmaline. A table d’hote lunch was three shillings and dinner was six shillings, although patrons could also order a la carte.

Although most sources date the transition to the Florentino restaurant to 1928, when Rinaldo Massoni leased it from Samuel Wynn, a strange little advertisement appeared in 1930 saying that “from January 20 the Cafe Denat at 80 Bourke Street will cater for clients as a Montmartre Restaurant”. By 1932 it was certainly Cafe Florentino, described in the press as one of Melbourne’s favourite cafes.

Calixte Denat died in 1922 after being struck by a tram near his St Kilda home.